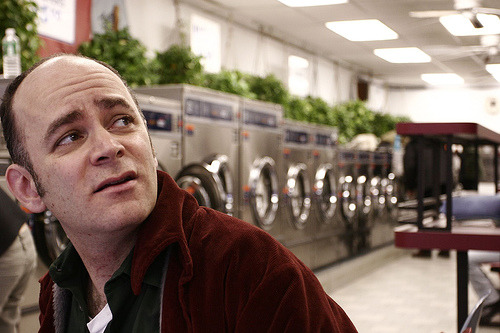 In November, in a tiny basement bar in Park Slope, Brooklyn, Todd Barry and an intimate audience of 120 people celebrated his twenty-year anniversary in stand-up comedy by eating cupcakes garnished with his gentle face. “At the end I gave out cupcakes with my photograph airbrushed on them,” explains Barry, from his hotel suite in Seattle, Washington. “They were extremely costly, but I dipped into my own money to buy them,” he adds modestly. “I didn't have a big finale. I figured everyone likes cupcakes.” It’s that kind of humble aesthetic that best sums up Todd Barry’s sense of humor. His lackadaisical stage presence, coalesced with his deadpan delivery and razor-sharp wit, has made him one of America’s premiere stand-up comics in both traditional two-drink minimum clubs and alternative rock venues. “I’ve had people say that to me,” says Barry. “Some people act like, ‘Wow you can do that room and you can do that room?’ It’s not like a fucking techno musician is making a country album.”

However much a trend it is, it’s undeniable that Barry is one of the few comics that can be booked at various rock venues across the nation and sustain a crowd. “Some people are over-romanticizing doing a show at a rock club,” Barry continues, “because they don’t know how to do comedy for the most part. Not that they fuck it up or they’re not willing to learn. But I’ve done shows where everyone is cool, except the bartender is talking at full volume thirty feet from you. It’s never occurred to him that he can’t talk like that while a show’s going on, because Dinosaur Jr. is not going to tell him to shut up. It puts me in an awkward position sometimes. Rock venues are great but you sort of have to educate them. It’s a more volatile situation. It’s like, they’re here to laugh and they’re here to laugh over here. Who cares? I don’t want to be judged on where I do my shows.”

His non-elitist attitude makes Barry’s low-key comedy and persona such an interesting draw. “I’ve never been aware of how low-key I am,” he adds. “I think I was probably always comfortable?” He began his career in stand-up around the end of the big comedy explosion in the eighties, at Coconuts in North Miami Beach, Florida circa 1987. “It was just kind of a crazy time,” explains Barry, “especially in Florida. You could get there at that time and work. There were guys who would come down, and there were three of those Coconuts clubs. You could work like seven weeks in a row in Florida. Two of the people I started with in Florida are, believe it or not, Carrot Top and Larry The Cable Guy. Larry The Cable Guy drove me four hours to my second paid gig ever in Clearwater, Florida.”

During his first few years doing stand up, Barry was following his vocation as a substitute teacher during the day. “Well, I don’t know if I would call it my vocation.” Barry ruminates. “It was just an extremely flexible job. If I had to do a show somewhere there was never, ‘Oh I have to trade shifts with Susie.’ I was hardly a teacher. I’m sure you remember what a sub did in your school.” At the time, Todd was also pursuing a career as a drummer in several punk bands around Florida throughout the eighties. “I was in a band called The Chant.” Barry explains about his nights as a percussionist. “We put out an album, on Safety Net Records, which was a small Florida label. The album was called Three Sheets to the Wind. That was out of Fort Lauderdale, the band I was in while in Gainesville was called Die Trying, which I’m sure every town has a band called Die Trying now. We opened for the Circle Jerks, at like a VFW Hall or an American Legion Hall. It was sort of wonderfully hateful. The crowd hated us. The song would stop and there would be nothing. No boos and no applause. It was very punk rock.”

And while the days of performing at small obscure venues are certainly fond memories, Barry has certainly stepped up his game in the past twenty years, as one of his most recent gigs was not at a V.F. or American Legion Hall, but rather the legendary Carnegie Hall in New York City. “It actually turned out to be much less scary that I thought it would be.” Barry explains. “I think it had something to do with the fact that the place is well lit and you could see basically everyone.” he adds. “Which for me is easier. Some people like the opposite but I like to see the crowd. Ultimately it's just another show and it's just another set. It's the mystique of Carnegie Hall and the reputation. It's kind of hard to be cavalier about the whole thing.”

His first two comedy albums, Medium Energy and Falling Off the Bone are excellent documents into his dry sense of humor, though one aspect of his live shows that often goes unseen is his penchant for doing crowd work. “Depending on the night, I always do a little of it,” he says, “partially just because I get bored with myself. It kind of enhances the whole night, if I can find something fun that’s unexpected.” Though most audiences are paying to see a specific performance, after several drinks a heckler will sometimes emerge from the crowd. “This is often a problem with the comedians and the staff.” he explains. “Some guy will interrupt, and the comic will have to address it on some level, and then the staff won’t do anything. ‘Oh, well he’s talking to him?’ He’s talking to him because he was just interrupted. He’s not talking to him because he wants to have a conversation with a drunk guy. There’s sort of myth that you can shut people down. If a drunk guy’s there and is an asshole, he’s probably not that bright.”

“There’s no zinger, that he’s gonna go, ‘Wow I learned a lesson, I’m gonna quiet down.’ If someone gets a little over-excited and they yell something, and you slam them, then they often will be quiet because they get it. But if a guy is just a complete asshole, then I just think it’s better to get rid of people. It’s just like getting rid of a tumor. I just went to see Aimee Mann, and there was this guy talking full volume at the bar. I think at any show there’s always going to be curiosity seekers and people there for dubious reasons.”

When he takes a moment to step back and reflect upon this past year, there’s no doubt that Todd Barry had a busy and productive 2007. He toured the states with Louis C.K. and Sarah Silverman, as well as doing a brief tour of Sweden with singer/songwriter Jens Lekman. Along with his guest spot on the season finale of HBO’s Flight of the Conchords, and his voice over work on the [adult swim] hit, Lucy the Daughter of the Devil, Barry will also unveil a new show he’s been working on for Super Deluxe. “I’m doing a show called Sexus.” explains Barry. “I play the title role of Sexus. It was written by me and a guy named Erik Richter. He’s the guy who created Harvey Birdman. It’s a live action thing. We spent our entire budget making it, so no money for me. I think it’ll look good.”

This past summer he recorded his forthcoming album at the Comedy Studio in Cambridge, Massachusetts with a tentative release date set for sometime in early 2008. While many stand-up comedians seek out attention and bask in the glow of flashbulbs, Todd Barry seems to prefer a quieter path of solitude and comfort. He lets his material speak for itself, and doesn’t cater to any particular audience. May they be Williamsburg hipsters or Hollywood douche bags, their laughter is sustained.

“It's just like any other job” he explains. “There's more to it than people think. It's starting to wear me out a bit. I think I need a vacation. I just did a tour of Sweden, and had a couple of days off and went to Copenhagen. It was a great city, but roaming around by myself wasn't the ultimate. I guess it was the alone part that I wasn’t really into,” he humbly admits with his trademark deadpan delivery. “It's more like coming home for three days and then leaving and coming home and leaving again. You kind of don't feel settled. But I guess that's the idea?”