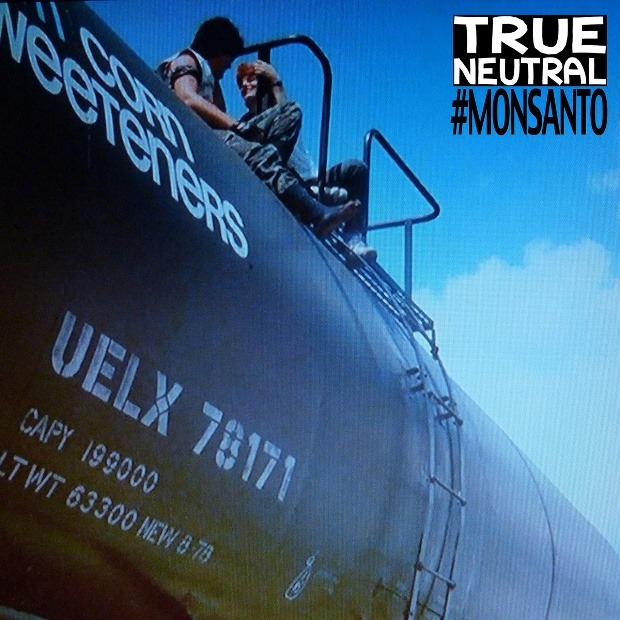 The nearly nine-minute title track to True Neutral Crew's debut mixtape, #MONSANTO, is a call to arms for all the farmers, teachers, creators of food stuff, engineers, factory workers, and purchasers of things made in factories to come to terms with their new home inside TNC's experimental hip hop. The introduction comes from Daveed Diggs of clipping., who is one third of TNC's core. His primary cohorts are Brian Kinsman of Foot Village and Margot Padilla, aka Margot I.E. Exploring TNC further though and staying glued to their progress will yield auxillery members like Books on Tape (now known as Boo Hiss), LCKY, Babies on Acid, and Black Pus (Brian Chippendale of Lightning Bolt).

Within the movements of the nine-minute “MONSANTO”, TNC manipulate Mega Man soundtracks, ambient washes, and pulsating tribal percussion, that honestly merits the crew's tag of “infinite experimental kraut rap”. The final movement features Kinsman and Padilla chanting a rogue's ode refrain that finds the common ground between the drum pattern awareness of Foot Village and clipping.'s noise rap. It's music for the advancement of hip hop all over again, but having already been there and given our current climate of experimental rap chic, it resides comfortably in our cluttered existence of turning our problems into art.

Can you trace the TNC origins? How did the idea for a group begin and then continue to expand?

Brian: My wife, Santa Boy (yes, I married a punk! Best decision of my life!), suggested over a year ago that I do a song about Monsanto. I knew I wanted to work with Margot on it because she is not only really creative, but also down for being both dark and silly at the same time. So we recorded the music for that track with no idea what the vocals would be, let alone that this would become a band. We weren’t sure how to approach the vocals, so we asked Daveed to help out. At least to me it was like, “I have no idea what vocal style would work, so let’s just ask a really talented vocalist and have no plan for style.” His verses for “Monsanto” were amazing and everything kinda snapped into place on how music that sounds like this can work with the vocals for the rest of us. At some point along the way we started having so much fun working together it became an actual band… or maybe something that exists half-way between a production team and a band?

Margot: Yeah, I was just excited to get to work with Brian. I was a fan of Rose for Bohdan and Foot Village so it was really cool to see how our styles sounded together.

Do you see TNC as having a lineup or is this a project that absorbs crew members as necessary?

B: Definitely it is Margot and I that keep the gears moving. And we also see this as a great opportunity to work with lots of talented people. Daveed will always be a part of things, but what is amazing about this project is the flexibility. For instance, we were stumped on the third verse for “I Guess” so we asked Daveed to come in and just lay down his genius. After a fairly philosophical conversation about it, Daveed helped us realize it should be Margot to rap on it. So even though you don’t hear Daveed on that track, it would never have come together without his wisdom. Anyway, we start recording the next mixtape next week with Joel Jerome from Dios/Babies on Acid and that will give things an entirely new twist. We also have a collection of beats in the works collaborating with Lauren Bousfield from Nero’s Day At Disneyland for a mixtape called #POPPUNK (which is literally taking pop punk recordings I did and turning them into mutant rap songs). As far I’m concerned, anyone we work with is our equal.

M: I’m getting hit up a lot now from really inspiring lyricists and beat makers about how they can be apart of TNC. I definitely see it being a group where you will hear so many different people that are loved on the upcoming mixtapes but since it is still powered by the two of us (Brian and I) it will have a style that is our own even when incorporating the works of others.

What connections did the group draw between Monsanto's genetic engineering and the sounds created that led to the mixtape title?

B: I love the tradition of rappers role playing villains. But personally I wouldn’t know how to pull off pretending to be a pimp or drug dealer. But pretending to be a Monsanto board of directors member, or an Illuminati, or a shady CIA agent all work well for me being a dorky white boy. The music hopefully sounds both victorious and dark. Villains winning the day, you know?

I went into it a little blind. I wasn’t sure about how this was going to sound because when Brian approached me with the lyrics he never explained them to me (at first). I would just go in and start mixing and after I would listen a few times I started to get it. I was like OHHHHHHhhh. haha. I think I like it that way, I might mix something differently if I go into it knowing the backstory and I find it exciting to learn the story as I’m mixing it keeps me interested in the track even after listening to it over again. As far as sounds go I knew it needed to sound like the end was nigh.

Are there plans or groundwork laid for a full length TNC record?

B: Yes. We know exactly what it is. But some more EP length mixtapes first.

M: My lips must remained sealed on this one but I can testify yes, indeedy.

TNC put up a remix kit for Monsanto… care to offer instructions or suggestions on how to use the kit?

B: Would love to hear more remixes like the Miles Farewell / Deli Mane one we included, where people add their own vocal verses, not just fuck with changing the beat.

M: Get to work! Monsanto commands you to.