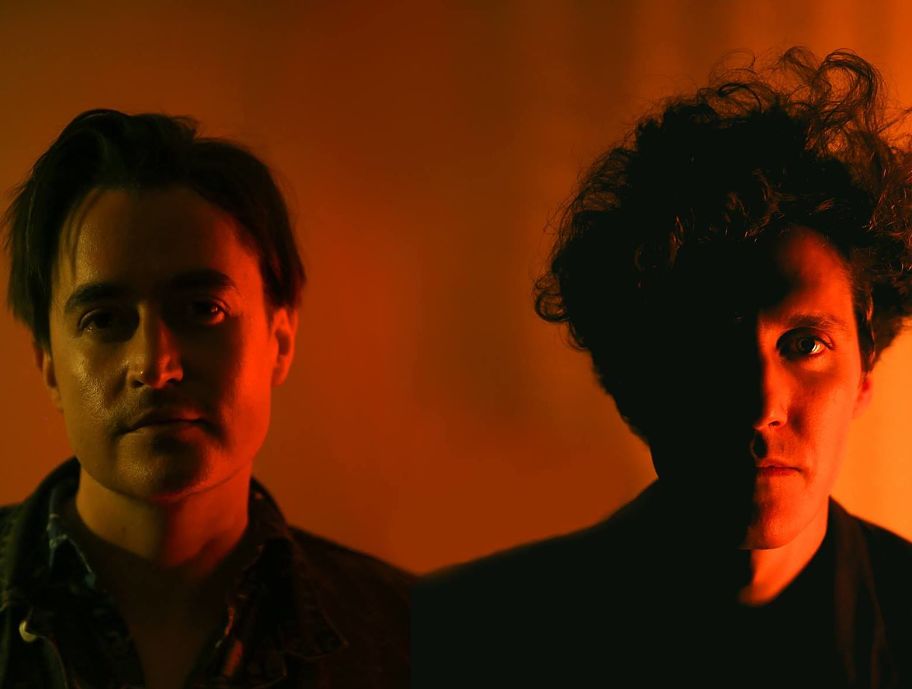 
Australia has always held it’s own rugged pop traditions that have inspired artists both near & far to furtherest reaches of influences & international intrigue. Like an expansive frontier of Mad Max-esque desert topography interspersed with outposts & oases, the duo of Michael Whitney & Luke Zahnleiter make music that sounds like ode to mystical mirages & more as Glitter Veils. As the duo releases the Figures in Sight remixes today available on cassette & LP courtesy of Terrible Records offshoot Flexible Records & in conjunction with Danger Collective—it is our pleasure & privilege to present the world premieres for the Gabriel Murphy video for “Soft Touch” that stars Emika Kazama & James Blake followed by debut listens to “Soft Touch” (Marly Lüske Remix) & “Gibberish Talks” (Cedie Janson Remix). Listen & observe as Luke & Michael’s audio arts become transformed from their home brewed hopes & visions into new discovered disciplines of realized aesthetics & embarked upon realities.
Gabriel Murphy’s video for “Soft Touch” underscores the inherent intimacy of Glitter Veils’ style by honing the focus on the more peculiar components of the track that posses something of a supernatural sound & aura. With visual production from Taylor Casey, Maya Luski, cinematography by Jarrod Harker & editing from Reilly Vanniekerk; the video’s narrative follows Emika Kazama as she travels about outskirts of rural valleys, fenced-off factories, busy waterways & more until she stumbles upon car keys that sets the rest of the adventure in motion. Emika sets out on her own lost highway trail that leads to passages unknown where the moody textures of “Soft Touch” make for atmospheres & mysterious emotions that contributes to the strange days & nights that are seen, heard & felt. We see a bespectacled James Blake make a cameo as a preacher man materializing from the cosmos where his exhaled cigarette smoke is played in reverse while our protagonist Kazama finds a seedy motel to catch some needed rest. While the world spinning effects & all-consuming brooding tunes begin to collect en masse as the track & video continue; we witness Emika applying lipstick rigorously in the mirror as the visuals go haywire & the effects distort the images of night lights & freeways that unleashes a surrealistic fury that involves a very big wrench & final confrontational showdown with a mysterious, shadowy figure. While Murphy’s video keeps the conclusion open ended, the seemingly delicate & restrained aspects of the rugged “Soft Touch” explores the more decidedly modern day gaucho elements of the track that expands the song to become it’s own current day western thriller of inexplicable weirdness.

For the Figures in Sight Remixes, Glitter Veils’ “Soft Touch” (Marly Lüske Remix) introduces new synths and new rhythm jumbles to the duo’s original equation. The serene sensations are complimented with some new boisterous beats that bounce down new paths that open up the track to a host of exciting new avenues. New keys create new sorts of dialogues as the new electric distortions frequencies offer new suites to explore & meditate upon. The ever-present ambient air fields are entertained as an arrival of new percussive sequences materialize from the song’s smoky veneer.

For “Gibberish Talks” (Cedie Janson Remix), ambiance governs everything around you. Glitter Veils’ ode to the exposition & expressions of nonsense are met with a new language of percussion & generative key sustains. The moody environment is expanded to create something akin to the feeling of exploring an abandoned warehouse deep into the recesses of evening. Everything from suspense to pangs of fear are rolled up into an array of sections that make up the five plus minutes of the remix that makes for the perfect urban exploration soundtrack. Cedie’s take on “Gibberish Talks” adds a whole new layer of intricate textures on top of Glitter Veils’ original where obfuscated dialogues are relayed in a bountiful bouquet of newly synthesized & sequenced audio senses.


Join us now for a candid discussion with Michael Whitney & Luke Zahnleiter of Glitter Veils about their wild new video, remixes, current interests & a whole lot more:
What was it like working with director Gabriel Murphy on the video for “Soft Touch” starring Emika Kazama & James Blake?
Michael: Gabe was great. He is a good friend of Luke’s and the whole process went really smoothly in such a short period of time. He is so driven and excited in his ideas that it put such a good energy into the shoot. From our original idea he wrote a script and organised a team to bring it into fruition. His eccentric and film purist nature definitely worked in our favour.
The clip turned out to be a pretty fun filled adventure. It was filmed over a couple of days around some bleak industrial areas, seedy hotels and mountainous landscapes around Brisbane and the Sunshine Coast.
Luke: It was refreshing working with someone so optimistic and passionate about their craft. Gabe’s face seems to light up when he talks about film, so we knew the clip was in the hands of someone who truly loves what they do
How do you both feel the moody, tense, escapist video adds to the track?
Luke: It was really interesting to see another artist’s interpretation of the song through a different medium. We had a general idea of the tone and setting we wanted from the clip, but couldn’t really articulate it. Gabe was able to take these initial ideas and create a pretty apt visual representation of what we wanted the clip to portray.
Michael: I think it takes the dark themes behind Soft Touch and pushes it further into a surreal, sinister environment.
Interested hearing in how your synergistic creative process works.

How do you both find your respective visions and talents intertwine with one another on shared planes of expression?
Michael: I think we fill in the holes and gaps in each other’s abilities. Generally Luke would focus on rhythmical aspects and I would for melody, though there was no real rule of thumb. Throughout making the album there were songs that took unexpected shapes from their initial starting point because we both have different processes in how we view and make music.
Luke: I have collaborated with a fair few musicians in the past, but working with Michael definitely felt the most natural. Sometimes we would write together, sometimes separately. I remember moments, throughout working on the album, where I was basically banging my head on a brick wall and trying to breath some life into a track. Michael would then take it in a totally different direction and make it feel new and shiny again.
Tell us about how the Figures in Sight remixes have impacted the originals and have added new meanings.
Michael: Cedie’s remix seemed to focus around the narrative of the lyrics and strip it back bare of any brightness the track has. It created a isolated and colder atmosphere which synced in with existential theme of the lyrics. While Marly’s “Soft Touch” remix the original track is almost indecipherable. It’s a strange cyclic journey, which bubbles and splutters along with unexpected turns.
What other artists, authors & auteurs have caught both of your interests as of lately?
Luke: I just finished Zero K by Don DeLillo, which was a pretty good read. I probably watch two or three movies a day, so they tend to bleed all into one. Although, I seem to have watched an abundance of Nicolas Roeg and Robert Redford films recently. I usually just pick an actor or director and work my way through their filmography.
I have been pretty slack with music this year…but I did like the recent releases by Perfume Genius and Arca.
Michael: Dean Blunt is probably one of my favorite artists currently. From Hype Williams to Babyfather I have been pretty obsessed with everything he has put out, its really unique and almost genre less in a way. Visually I really love the directors Yorgos Lanthimos and Tom Ford. Their films Dogtooth and Nocturnal Animals definitely had an influence in making the Soft Touch clip.

Tell us too about how the Flexible Records/Terrible & Danger Collective connection came about.
Michael: Once the album was finished in early 2016 we sent it around to labels we like in Australia and around the world and after a few months out of the blue Ethan at Terrible Records got in contact with I like this, I’m going to sit in on it… A few months later he got back to us and confirmed Flexible would release the record. Shortly after Figures in Sight came out, Danger Collective approached Flexible and us about releasing some glitter tapes, which we are super excited about.
Other local AU/UK artists that you two dig?
Luke: I’m into Aus artists such as Lost Animal, Orion, Htrk, Standish/Carlyon and Blank Realm.
Michael: Locally I’m a fan of Madboots, Scraps, Brainbeau, Orion, Nite Fields, HTRK, En.V, Spike Fuck and Lalic. From the UK/EU I love Smerz, Better Person, Andy Stott, Love Cult and Jon Hopkins.
Parting words of advice & wisdom?
Michael: Try and find a truth in whatever you’re creating. The most interesting art for me comes through personality rather than any technical expertise or image.
Luke: The guy who mows our lawn said to me the other day, calm seas don’t make good captains. Very true…
Glitter Veils’ Figures in Sight is available now on both cassette & LP courtesy of Flexible Records/Terrible Records/Danger Collective.
Pages: Page 1, Page 2, Page 3, Page 4, Page 5, Page 6, Page 7, Page 8, Page 9, Page 10, Page 11, Page 12
PrevPreviousDeadfellow, Mescacalifornia
NextSaba Lou, "Waiting For The Bus"Next