Friday at Death By Audio was another entertainment4every1 production, with typically varied lineup, this one incorporating fully six out-of-town acts from four different cities (plus a local opener). If there was a loose unifying theme, it was various uses of electronics, but that’s definitely a very loose theme seeing as two acts involved nothing electronic at all.

Those two acts were Family Trees, a twangy drums/guitar/harmonies side project of Brooklyn electric folk outfit Hologram, and Oakland guitarist Brian Glaze (formerly of Gris Gris and the Brian Jonestown Masacre), now in simple classic rock configuration with a bassist and drummer.

In between those bands, the first taste of synthesizer: Richmond, VA’s Boys Lie, who sound like exactly what happened by mid 80s or so, when new wave forgot its debt to punk. Which isn’t really a complaint, as Boys Lie demonstrated a reasonable flair for the pop arrangements of their forerunners. Their stage show, however, left something to be desired by borrowing the karaoke performance approach of Best Fwends without their energy, the three members diminishing in energy, left to right, from “high melodrama” (good), to “restrained but willing to throw himself on the floor for effect”, to “catatonic” (less good). Maybe they just need some more elaborate costumes than southwest-Indian-themed sweaters.

Boys Lie’s “high melodrama” component was also keyboardist for their Richmond tour partners Hot Lava, who kicked things up a bit with more solidly rock-oriented live arrangements of their take on electro-pop, embellished by glossy synthetic flourishes, catchily distinctive vocals, and a surprise appearance by like a Sousaphone or something. (My horn IDing skills are notably lacking.)

Videohippos were the expected following act on the bill, and shortly thereafter delivered their hazy electronica-tinted lo-fi rock. Somehow, even when moving into the upper tempos, as on a selection of apparently newer pieces, they maintain a sort of downbeat dream-feel, amplified of course by their accompanying video collages of hypnotism advice, bits of John Carpenter’s They Live, and arcane cartoons.

But before all that, a sudden appearance by Videohippos’ Baltimore and Wham City ally Blue Leader. Blue Leader is not a band or musician, but more a lecturer, delivering this time a rousing oratory titled “The History of Video Games Part III: The First Person Shooter.” Sort of like a manic army recruitment speech delivered by a halloween/pajamas version of Cyclops, but recruiting its listeners to fight the actual monsters from DOOM, as illustrated via projections on the screen behind him. This appearance was a welcome interlude that no one, not even e4e1 organizers Dave and Edan, saw coming.

Finally, Lymbyc System finished the night with easily its most accomplished show of musicianship. The two members, brothers from Austin and Phoenix, now releasing on notable electronic/hip-hop label Mush, each surrounded himself with a formidable collection of gear, one with a three synthesizers (two of them full-length keyboards) and a pedal array, the other taking live drums, assorted additional percussion, and xylophone. And while their sound was classic lush electronica in vaguely the Four Tet vein, the brothers seemed to be pulling it all off live. Literally all the major song components, elaborate counter-melodies and evolving breakbeats, were visibly coming out of their instruments right then, with only minor atmospherics and background noise requiring some additional sequencing. Caribou, even with twice the touring members, isn’t quite this good at recreating their warmly electronic arrangements before an audience. And I didn’t even know the Lymbyc System before this show, so this all came as a very pleasant surprise. 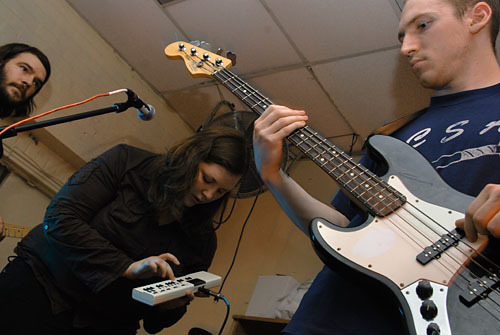 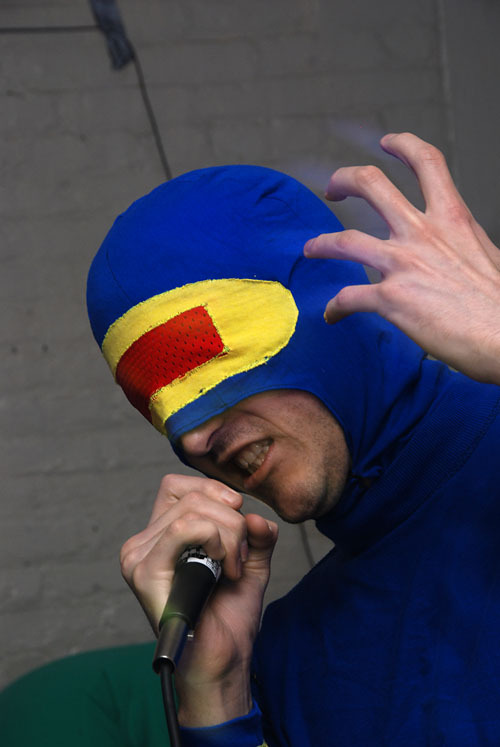 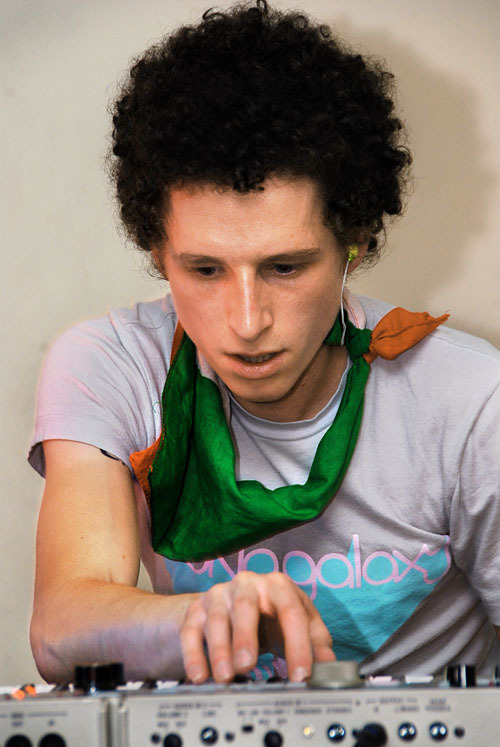 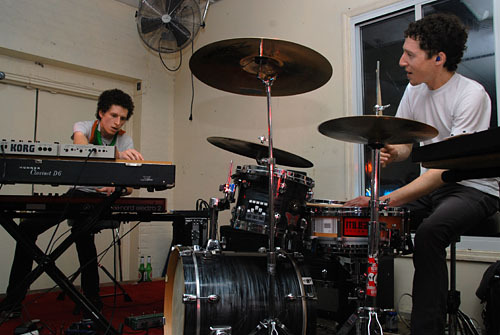 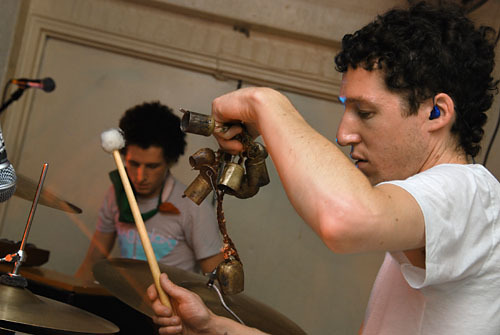 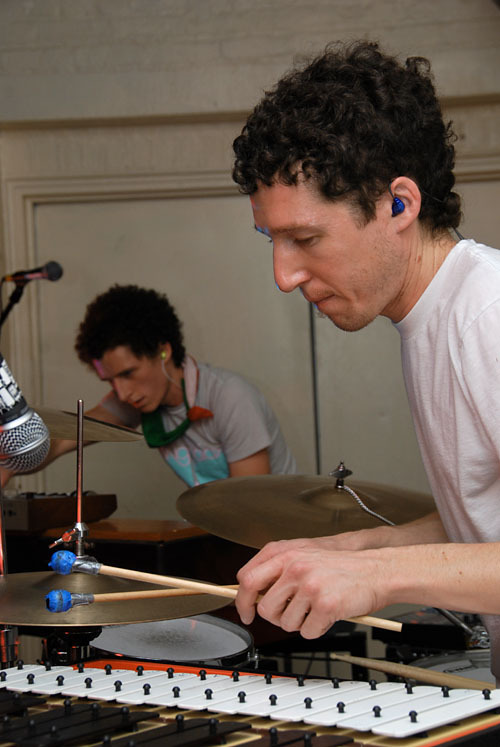 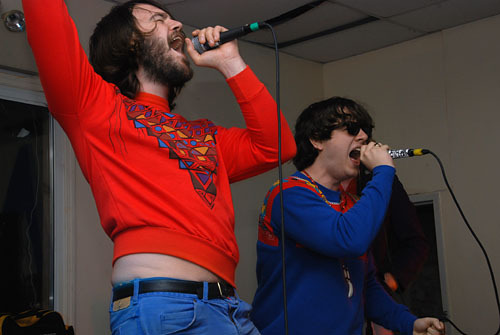 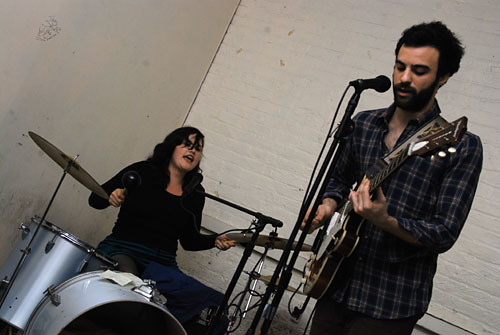 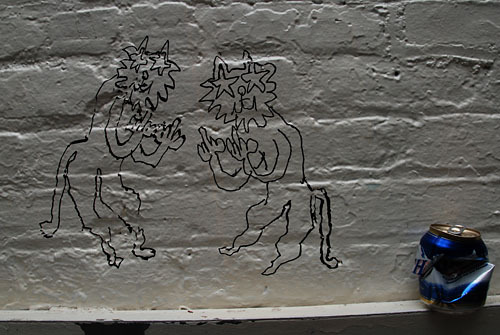 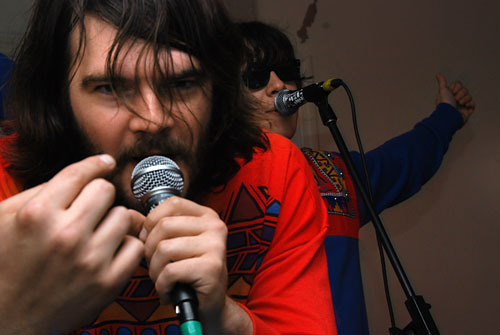