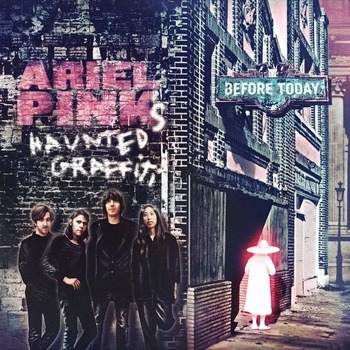 “I can’t, stop, the press, don’t wanna, stop the, press,” Ariel Pink proclaims on the track “Beverly Kills” from his much publicized, leaked, lambasted, praised, mocked, anticipated and sorta hated album Before Today. With an extensive, decade long history of lo-fi recordings, dodgy live shows, noise terrorism and genre jumbled Paw Tracks releases, he has now done something that has captured the collective attentions, wonderment and critical ears of fans and the music media. And for fear of Mr. Ariel Rosenberg going mainstream, devotees are holding tight to their copies of the Doldrums, as we hear a new realization of Ariel Pink and his Haunted Graffiti. With the newfound luxury of being signed to indie behemoth 4AD, Before Today was recorded in Tito Jackson’s home studio and produced by Quincy Jones’s grandson Sunny Levine, along with Rik Pekkonen of Bread, Bill Withers, Seals, and Croft production credit fame.

With Mr. Rosenberg’s legacy of home recording duties passed to the Jackson family and company, the album grooves in a smoother direction than we have ever heard from Ariel Pink’s Haunted Graffiti. The analog fixations remain, displayed with a shiny production of Pink’s most beloved radio anachronisms of decades past, with production standards set steadfast in 80s musical technologies. With six years of waiting, this is the album fans and detractors alike have been waiting for. With Rosenberg free from shouldering the total strain of laborious production work, we have had the pleasure to watch the wiry Wonka’s baiting of the press, erratic behavior in interviews, lower-fi renditions, 4AD sessions, Viva Radio interviews and performances with his hero R. Stevie Moore.

“Hot Body Ruby” lands like a jumbo jet with a saxophone groove that brings you the reformation of Ariel Pink like we have never heard before. His cover of 1966 nugget “Bright Lit Blue Skies” by the Rockin’ Ramrods is a preservation treatment of the original with production values dunked in formaldehyde and “updated” with a sweet, smooth, 70s sounds. “L’estat” has all the trimmings; spit fire changes, vintage electric synthesizers familiar from assorted hits spanning The Doldrums to Scared Famous but with a significant difference. Here you get to hear the best damn technical execution production nowhere to be found on those wonderful aforementioned albums. “Fright Night (Nevermore)” brings out some of the old lo-fi Ariel we know and love but again with tighter arrangements and synth-heavy new romantic overtones. Nowhere has the new production treated the man so good but on the single “Round and Round.” Smooth harmony refrains of, “hold on, I’m calling, calling back to the ball and we’ll dazzle them all, hold on,” thump with a “Billy Jean” baseline that will remind you immediately who Sunny Levine’s grandfather is.

The mood shifts to a comical Zappa lyrical farce with Christian Death gloom and doom guitar on the nonsensical “Butt-house Blondies.” “Little Wig” achieves heights not usually reached in the pop consortium, moving through layered motions of builds, break downs, rich multi instrumental layers that will make you swear up and down Jeff Lynne and Roy Wood are collaborating again. And then the groove goes smoother still with “Can’t Hear My Eyes,” a yacht-rock ready tribute to the keyboard work of the great Michael McDonald. The electronic flute sample on “Reminiscences” has been criticized and compared to Weather Channel incidental music, perhaps unfairly upon a careful listen to the weird, warbling of keys that reinforce Pink’s pan-80s commitment to genre convergence and reinvention. Those slick Jacuzzi keys plunge into the fanfare in the hilarious, oddball gender reversal escapades of “Menopause Men”. And the ending pays an ode to the early to mid 80s sound of Manchester, England wrapping together the albums Closer and This Nation’s Saving Grace with the dark moribund brooding of “Revolution’s a Lie.”

Backlash, hype, buzz, and armchair critique wont contain nor convey this new incarnation of Ariel Pink’s Haunted Graffiti. Before Today brings about that promise of yesterday’s sounds with a cohesive, well-rounded contemporary freshness. Fans will rejoice while nonbelievers will be forced to reconsider this eccentric who has made the best album of his career.