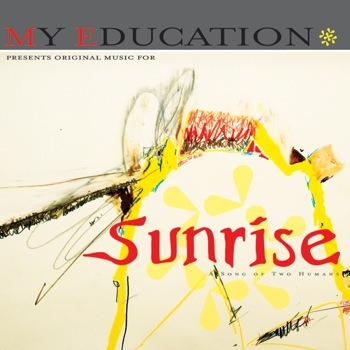 This Austin instrumental five-piece has gone back in time artistically, and demonstrated some serious non-commercial balls, with this album, culling these “songs” from their original score for F.W. Murnau’s 1927 silent film, Sunrise: A Song of Two Humans.

Evidently, David Fricke loves them since he compared them to Explosions In The Sky and called them “advanced ecstasy.” And they’ve played with an eclectic mix of good bands, A Place To Bury Strangers, Bardo Pond, Red Sparowes, and The Black Angels, among them. Of the seven songs on this disc, the crux of their sound is the viola of James Alexander, accented by the pedal steel of Chris Hackstie. The rest of the band, Brian Purington on guitar, Scott Telles on bass and Chris Stelly on drums, tend to work around the sometimes somber cries and creaking moans of the viola and pedal steel playing, although that’s not to suggest that they only exist in that realm, or can only do one thing.

They are also joined by several other musicians on piano, cello, vibraphone, French horn, and they quite effectively play off of the timelessness of silent-era cinema accompaniment by letting loose with some vintage-sounding flurries now and then, while also keeping the pacing in mind, as well. The opener, “Sunset,” is gray and misty, and yet it pulls you up instead of dragging you down, and it doesn’t feel “dated” at all. More like another variation on the post-Dirty Three violin/viola bands reconfigured through their aural time machine.

The songs don’t feel like parts of a film score. They hold it all together very nicely and although some songs drag a little bit, the cohesiveness of the entire album is impressive. These guys are accomplished players with a keen sense of what they’re trying to do.