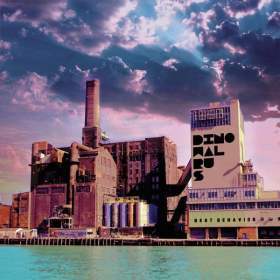 Somebody had to take the reins on the egalitarian approach to dance pop, and, in this day and age, the execution of this particular shade is either too exploitative or too esoteric for a heterogeneous bunch to enjoy together. Despite the obvious cues from the “Second Summer of Love” and all that 24-Hour Party People taught us, Dinowalrus’ second album, Best Behavior, generates a seamless balance between late ‘80s/early ‘90s stylings of the aforementioned “oldies” and experimental pop by a generation devoid of identity and imbued with technical know-how and eclectic taste. This album slaps the festival scene in the face for ever thinking that LCD Soundsystem mattered.

What we have here is another reference in the necessary emergence from the culture of “cool.” A group of dudes that said, “Fuck it. This one’s for everybody.” A seemingly conscious departure from the ostracizing funk-psych of their firsty, %. Right on, Dinowalrus. And they’re Brooklynites.

A change in 2/3s of the lineup — Liam Andrew (synth/bass) and Max Tucker (drums) are now backing head Dino Peter Feigenbaum — may have a little to do with Dinowalrus’ adjusted and more focused vision, but the compelling results will more likely than not have you scratching your head over “Where has this been?” than “Why?” That’s because the chorus-laden muscle and hook of the tracks rarely give your brain a break. Although, former members Kyle Warren (synth/bass) and Josh Da Costa (drums) do take Feigenbaum’s back on “Phone Home From the Edge” and “Burners” adding a subtle nuance to Dinowalrus' matured behavior.

Best Behavior is broken up into two parts over its nine tracks separated by a 57-second segue of dub reminiscent of the Robyn Miller-helmed Myst soundtrack (that visually stunning game with an ambiguous plot your dad was really hyped about in ‘94). Both parts brandish an infectious blend reel and hook that rivals any sound or style they might recall.

Straight out of the gates, “The Gift Shop” flexes dance with breathy melodies, tropical percussion, and driving bass that never let the wave of swirling distortion submerge its throbbing head. The edges are well rounded, which never sound too harsh, allowing the full degree of musicianship to shine and peak into a wah and delay-heavy face melter. “Phone Home From the Edge” merges the woozy sway of My Bloody Valentine’s Loveless with the madcap excitement of Animal Collective’s Strawberry Jam. “Beth Steel” retains the flow while offering us a glimpse in to what Dive might sound like once they get out of the shadow of being Beach Fossils’ Zachy Smith’s side project.

This bring us to the peak of Best Behavior, “RICO.” A bizarre MDMA-friendly blending of trance and psych-pop. It sounds like MGMT, Evangelicals, Hot Chip, WU LYF, Gauntlet Hair, and Darude were all trapped in a studio until they came up with an acceptable jam for the devil himself to munch E to.

Following the segue, Feigenbaum’s former touring mate Patrick Stickles, of Titus Andronicus, pops his head in for a raspy guest appearance on the chorus of “What Now” propelling us into the krautrock-heavy leanings of the remaining tracks. Closing off Behavior is “Riding Eazy” which relaxes the tension allowing the flavor of the latin percussion to perpetuate the glistening convergence of Feigenbaum’s charred vocal swing.

While Best Behavior will yield repeat listens on your headphones, it begs to breathe the open air. Give it life. Let it save the waning and bored heart of the music festival.