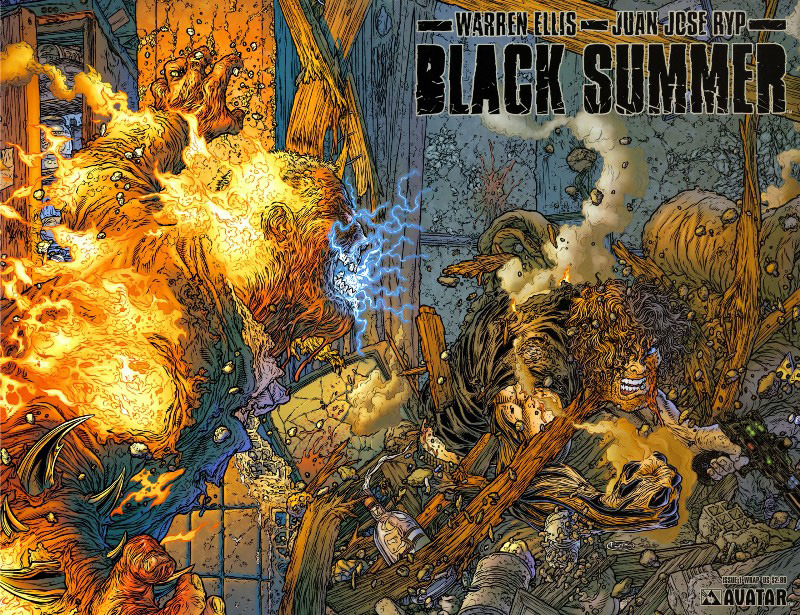 If you're scouring these internets for word on Warren Ellis's latest and greatest, look no further. The fancy-pants future Astonishing X-Men author is hitting them out of the park for Avatar as a Marvel run could only dream of doing. Black Summer follows on the heels of issue #0's shock and awe, wherein the resident superhero of planet Earth gets fed up with business as usual in the White House and murders everyone in it. He then turns to the United States people and gives them the chance to try again; as you could expect the ensuing response is anything but flowers and candy. The military leadership of this “fictional” United States is none too keen to have their cash cow bolt for the slaughter house doors, taking it upon themselves to hunt down the original president-slaughtering hero, John Horus.

Whooo…deep breath. This brings us to the real protagonist of the story, our one-legged, alcoholic eyeball for the proceedings, retired hero Tom Noir. Tom Noir is meant to be the reader's stand-in, its observational vantage point. So what does it mean that his life is a complete wreck, and that he is basically an alcoholic jar of couch potato waiting to die?

The social commentary of this book comes fast, and viciously biting. It's the kind of bitter through-the-teeth idealism that much of Ellis's best works possesses. The world of Black Summer and the ideas behind John Horus's actions fit very well next to Transmetropolitan, Fell, Desolation Jones, and The Authority. And while it may remain to be seen how long Ellis sustains the blistering pace of excellence in this book, it doesn't change the fact that his production to date is the kind of fire cracker subversion that the comic book world has been tilting towards, particularly with some of what Mark Millar has been doing over at Marvel. (Closer in the bedlam of his Ultimates series than the more tame Civil War. Arguably, Warren set the tone even earlier, in his Stormwatch and Authority days.) Either way, what's important is that this book is in Warren's wheelhouse, and that while it's been hinted at by other comic book writers in the last six years, it's never been articulated to this degree.

And then on top of the really brilliant concepts and writing, we've got the brilliant mess of drawing that Juan Jose Ryp has thrown together for Ellis. Even when the book is at it's cleanest, it still feels like you need to wash your hands after pawing through its pages. He realizes the sheer muck these characters live in, so that the book has none of that glossed-over pinup art you might get from the big two. These are beer bottles and blood pages, and that is definitely to the book's credit.

If you've ever wondered just how America's founding ideals might stand up to a dystopian 2007, read Black Summer. Talk about it amongst your friends. And maybe register to vote afterwards. You could make a day of it.