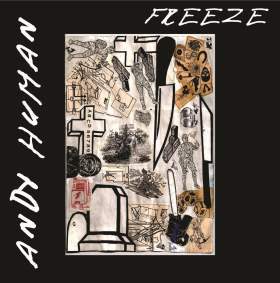 Paranoia, discontent, a complete inability to relate to almost everybody, everywhere – all of these themes run through Andy Human’s Freeze LP. But all of the anarchy, uncertainty, and breakup aftertaste is stuck in-between jangling, up-beat, high energy punk, with a shimmering glam gloss that’s almost euphoric at times. It’s punk in the pop- ish style of The Ramones, sounding like a throwback to a time Human seems to better understand, with more substance between the sugared hooks. Freeze focuses on a central theme of displacement, and a struggle against it, but whether Human emerges unscathed or any better for the time spent below remains to be seen.

Human isn’t happy with the way of this world. In “Fall,” the most repetitive and anarchistic song of the album, Human repeats “I want it all to fall” over and over, in an electric toilet flush, whirling around in a hollow, humming tube that sounds like an approximation of the future by the past – a retro spaceship headed to planet nowhere, perhaps a reflection of a unrealized dream of how things could be, dead in days long gone.

But Human isn’t ready to totally let go. “Land of the Dinosaurs” bops along to modern bewilderment with absolute zeal, but doesn’t ultimately embrace a Richard Hell-esque suicidal daydream or apathetic resignation. Instead, the one thing Human is sure about is his desire to do it all, bursting at the seams with some kind of search or at least his own controlling drive. On “Penumbra,” where Human’s amazing vocals really stand out, combining bite and badness with breathy builds and a sweet slithering, he contrasts the urge to get out in the world (singing, “It’s time to step outside and join the human race”) with a disconnect from the people who populate it (“everywhere I go, I feel out of place”). Like a permanent wallflower, Human wants to be at the party, but can’t get those seven minutes in heaven.

Human spends a lot of the record longing for or fighting against a possible angel from the past, making Freeze, at least in part, a punk rock break-up record with Human nostalgic for a what sounds like an imaginary 80s girlfriend who wore too much eyeliner – his Patti Smith or Debbie Harry (the alterna-Betty and Veronica). But more than your usual break-up record, the songs about a girl-who-used-to-be long not just for pretty lips, but for a real partner in crime, a soul to stick to in a world that doesn’t make sense. As Human battles the world outside, it’d be nice to have someone to hold his hand, even if the biggest problem lies inside, as Human suggests in “Something Rotten.”

In-between all of the confusion and malcontent, one of the most fun songs on the album (and, believe it or not, that’s saying something), “Break Your Face” features the awesome choral chant: “The only way I know how to break away/Is to break your face,” set to an absolutely chaotic and crazed organ blowing out some gospel to add some pop possession into the mix. Because every fight for life needs an organ theme! As goofy as it sounds, it still comes down to Human’s us-versus-them mentality, and the need to fight against something to define himself.

But in the end, that fight closes off with “Carpe Diem,” an ironically titled track that repeats “Stay home and watch TV” with the same repetitive lust as “Fall” in a distorted, circular rhythm, like an exposed subliminal track, warped at times to sound more like, “Stay home and think about me,” a pretty revealing and self-aware twist, turning a spitting survey of modern followers into a just as vicious attack on himself and his preoccupations with himself. The last two sentences serve as a staccato break that leave Human much where he began, though perhaps unifying both the people he can’t identify with and himself in one shared sentiment: “I am afraid/I am afraid.” At that moment of reflection, maybe it’s possible to see a glimmer of understanding, a chance to meet in the lonely moments we all share, even if we can never truly share them together.