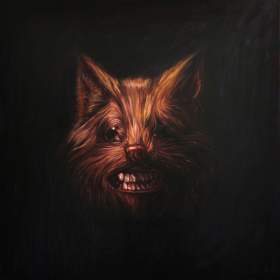 In the context of Michael Gira’s insistence that Swans’ new incarnation is focused on creating “joyous” music, The Seer contains surprisingly few moments of elation or release throughout it’s nearly two hour length. It is fraught with the sense of ascension, a clambering upwards to some enlightened spirituality, but this journey is portrayed as a rigorous and challenging trudge.

Through repetition, violent rhythms berate listeners until a brutalized fatigue overcomes the recipient. Respite is issued momentarily, but it serves as a moment to catch one’s breath rather than feel euphoric. In fact, at the end of “The Avatar,” Gira issues a dramatized heavy breathing, as if to mock the listeners toil.

Gira enlists the same group from the “reactivated” Swans full length in 2010, My Father Will Guide Me Up a Rope to the Sky to perform on The Seer, with additional notable guests such as Jarboe, Mimi Parker, Alan Sparhawk and Karen O. My Father… established Swans’ new proclivity towards repetitive, menacing grooves and a strong presence of hammer dulcimer, bells and lap-steel guitar, but the instrumental aesthetic and thematic grandiosity is driven home on The Seer.

The Seer is a burly and masculine album. In Swans’ frowning press photos, each member appears haggard and weathered features are showcased, as if to illustrate the physical toil of recording and performing songs from The Seer. Karen O’s appearance as lead vocalist on “Song For The Warrior” sounds like it belongs on a different album, but its inclusion can be viewed as Gira exorcising the last of his quasi-folk inclinations from other work. The percussive break ending “The Apostate Pt. 2” on side 2 (the vinyl version contains three LPs,) is like a machismo-ridden, percussive progressive rock workout routine. Following a groove repeated for about eight minutes, its arrival is a shock, but that’s largely how The Seer is so impactful.

The instrumental grooves not soothing, but after enough time they become anaesthetizing. In a few instances, this can take up to fifteen minutes. As soon as that elusive point is reached, however, The Seer delivers a curveball. Without a fade, discernable cue and likely not even on the predictable beat of the measure, songs careen into percussive breaks or another gnawing and plodding groove. The “grooves,” as described here, are partially so inaccessible because they side-step common rock and pop influences altogether. On the strongest tracks instrumentally like “The Apostate Pt. 2” and “The Avatar,” there are no post-punk tribal beats, soul chops or krautrock motorik rhythms. Only counter-intuitive pummeling and a theme that’s easier to roll around on the floor to than tap a foot. The likeliest sources of inspiration are twentieth century classical composers, only reimagined with bizarre timbre and Gira’s vocals obscuring everything further.

The strongest tracks are those in which Gira alternately conjures the persona of madman, preacher and blasphemer through his vocal performances. At his most reserved, a mild baritone spews straight-forward nature imagery, but a harsh fluttering or trace of a snarl at the end of a line reveals some nefarious underpinning. With his seething, possessed delivery that often degenerates into indecipherable sputtering of presumably vile notions, Gira is possessed with a compelling vitality. It may be his positive ascension, his communion with forces greater than himself, but to listeners it likely seems grotesque and anguished, and all the more fascinating because of it. While Gira envisions the reactivated Swans as crafting a pedestal beneath heaven, The Seer more often evokes the three chewing faces of Satan ending Dante’s epic.