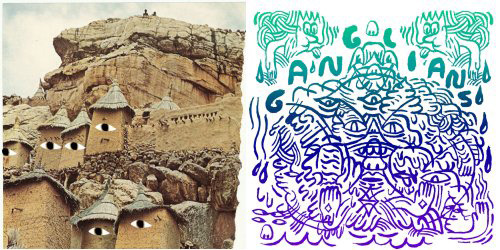 From the mouths of the musicians, Ganglians are about writing: “pure naive headphone acid pop to drive to, at least that's what was going through our heads.” During a recent drive from Sacramento to San Francisco I put Ganglain's dual 2009 records, Ganglians and Monster Head Room, to the test, burning down I-80 tossing cigarettes and weaving through annoying commuter traffic.

I hear it in the dark pyschedelic songs like “Hair,” “100 Years” and “Rats Man.” Ganglians have this Dwyer like ability to access their freak flags and invite you along for the ride. The chants that drive “Hair” are catchy in their esoteric communications, while the pulsing drum breaks and hi-hat tingles guide the signal to the pleasure regions of your minds, conveying the message to whatever psychedelic psyches we actually possess. As I drove to these songs I felt like a mutant behind the wheel, lifting the pavement from the shred of my tires. With its intensive build, the rawhide western stomp of “100 Years” had me willing to test the state patrol. The Ganglians will have you rationalizing high-speed car chases.

Luckily the bad acid trip terrors are separated by tender vibrations that will soothe you away from taking an outlaw plunge. It's in the slow numbers where these young cats from Nor Cal earn their keep, separating themselves from the scuzzy-buzzy lo-fi lot, with songs like “Crying Smoke” and “Lost Words,” or the tinkly guitar licks on “Lost Words” that toy right along with the lead singer's one-man-beach boy vocal patterns. As a fellow Sacramentoan, these songs feel like Blue Monday 88 cent PBR bottles at Capital Dawg; stoned bike rides on the Midtown grid; a raft float down the American, dragging a bag in the water to keep the beer cold.

“Crying Smoke” is a stoner's daydream as Ganglains sing, “List the things that do not matter / Hopefully one day I'll check the last one off / Hopefully one day with some luck.” Oddly enough, Monster Head Room, which is out on Woodsist, is the elder of the two records. Ganglians might feel rough around the edges, but it reflects the loose cannon pscyhedelia the band intends to pursue.

Personally, I see no problem in the fact that some of the songs on Monster Head Room are transmitted from Beach Boys vaults. Even the subtle Dwyer biting of “yippie” reverb drenched vocals is forgivable, as the Ganglians treat it with their acid balance, and manage to transport it to their own freaked out territory.

If I may close with an elaborate anecdote to mail this review home on a spaceship, I only have this to say regarding the Ganglains and comparisons to its Woodsist family. For the past week, I've been listening to the Ganglian's albums while making lunch. Considering my financial situation, it's been a lot of grilled cheese afternoons. The thing about grilled cheese is, it's always delicious, but sometimes grilled cheese needs more. Sometimes it needs jelly. (If you have yet to try this concoction, if you have doubts of its deliciousness, I implore you to hear me out. Toast is boring. Toast requires a jelly or a jam, or to be made with melted cheese. Grilled cheese is just toast with butter and cheese. When you think of it this way, jelly seems rational.)

Ganglians sound like most of the bands you've enjoyed so far this year. Whether it was Woods, Wavves, Thee Oh Sees, Eat Skull or some other pyschedelic lo-fi surf rock garage outfit on Woodsist or In The Red. It's all feeling like routine grilled cheese, but Ganglians might be that band that is grilled cheese with a fine layer of jelly. Ganglains break from the herd with a proclivity towards blowing out the lo-fi and an ease to be slackers without riding on it as an image, Fleetwood Mac mating with The Kinks offspring and wild west gunslingers, all in the span of two records.