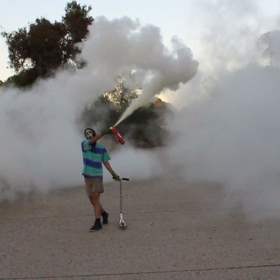 Imagine a retirement home in Florida. A dancefloor heaves under the weight of dozens of elderly couples, swaying with hands on each other’s waists, shoulders, loose limbs; all of them move slightly off the rhythm, grinning with slick teeth pressed falsely together. A low-hanging disco ball turns like an orange from a branch, and the ocher glow sparkles over deep-lined skin and floral dresses. It’s a simultaneously unsettling and heartwarming scene, not unlike doing mushrooms at the Venice Pier, or having your picnic ransacked by raccoons, or listening to the latest Heavy Hawaii record, Goosebumps, which would fit as the perfect soundtrack to any retirement-home shuffle.

The San Diego duo of Matt Bahamas and Jojo Keylargo have fallen into a sound on this record that seems not only perfectly intentional sonically, but backed up by album art, title, and even the simple insistence in their name—Hawaii rarely gets prefixed by the adjective “heavy,” after all. In listening to the 10-track 28-minute release, the ominous feeling that is bound in its deliverance never leaves the listener—an intent actualized by waterlogged guitars that vibrate and swirl, keys as systematically timed as the organ at a baseball game, and vocal processors that deepen and contour the texture of Bahamas’ voice to a low threat. The threat in his vocal tone is reminiscent and connected to the album art, a kid donning a Scream mask in an eddy of pluming extinguisher smoke. Everything in the dense catatonic dream starts to add up and synergize.

By the third track, a 54-second instrumental called “Red Rails on the Sunrise,” the listener becomes aware that they’ve entered a funhouse from which there may be no escaping. The retirement home dance starts to take on an eerie, Tim-and-Eric unwieldiness, like taking the best of Tonstartssbandht’s releases and dipping them in the Secret of the Ooze. “Airborne Kawasaki” invites the listener to go for a ride, to take some drugs, while “Fuck You, I’m Moving to San Francisco” shifts the pitch even darker, laying claim that Bahamas is going to be what “my mama expects of me,” all while slowing the pace beyond even the most head-heavy inhale from a gravity bong, which is probably the most apt summation of what Heavy Hawaii accomplishes on Goosebumps. An overeager pull on a 2-liter Coke bottle, cloudy eyes bearing down on the murky water below.

At the close of the record, the crisp pop nuance that Bahamas and Keylargo were so direct with on their debut full-length, HH, is present in the beachy, surf viber, “She Gets.” It’s a light, frills-free ode to a woman who gets what she wants, like all those head-turning bodacious babes strolling down near the surf, with their tanned shoulders catching the golden, white sun. “She Gets” is the least sludgy track on Goosebumps, which is not to say it’s the best by any means—but it does serve as a step toward awakening from the slowed-down, manic dream that the rest of the record has us suspended in. “She Gets” is the inverse of a countdown to anesthetics at the dentist—it’s a count-up into sobriety, a hazy attempt at clarity as yet undiscovered on the whole album. The closing track, “Sue,” repeats the line “Now you know / it’s all good” several times, and before we know it, the moment is up and the sharp, crisp world around us comes back into view.

But like all strange dreams, the haze of the subconscious memory is hard to shake.