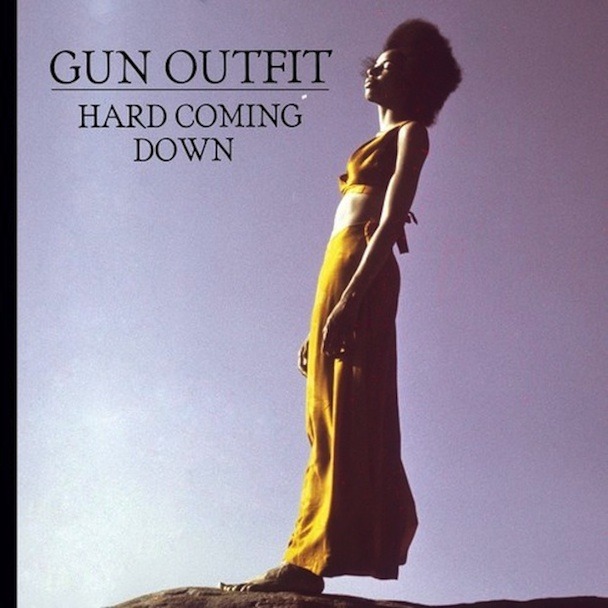 Gun Outfit’s 2009 debut Dim Light elicited praise for skirting various trajectories of 80s college rock with particular emphasis on Pacific Northwest predecessors and the second-wave SST bands. The group’s referential character couldn’t be disregarded as gimmicky or nostalgic, though. It drew from a diverse record collection, and even the most pedantic guardians of the college rock era were dwelling on the expressive vocals and the spirited performances rather than making endless comparisons. Gun Outfit revealed one influence after the other – a particular inspiration channeled on one track but discarded in favor of another on the next. No matter the source material, Gun Outfit appropriated with conviction and unloaded the psychic baggage of their modern Olympian existence in song.

Hard Coming Down, Gun Outfit’s first full-length since 2010’s Possession Sound is less like a Homestead Records compilation. In fact, it’s more like Gun Outfit hocked their record collections to support a dope habit. But, scratched Dinosaur Jr. records don’t earn much cash and, as the title suggests, Hard Coming Down is an introspective narrative of withdrawal, full of self-doubt and bedroom Americana. Relative to previous albums, Hard Coming Down is down-tempo and sparse – Gun Outfit retreated inward and waxing reflective with emphasis on the staggering emotive impact of a human voice unadorned.

Sharp’s vocal assets are neatly wrapped up in the plodding “Lau Blues.” Its minimal percussion and understated riffs are only subtle accompaniment to his desperate lament about dignity and isolation. Whether nasally yelling “fear” or emphasizing the alliterative passage “chop wood and choke on pipe smoke / while tears well up inside,” Sharp is a powerful vocal stylist, capable of carrying a track all alone.

Throughout the album, Keith’s vocal talent is clear, but she occasionally falters for effect, often specifically to reinforce a dramatic musical change. The pristine recording quality, rather clean guitar tones and prominently mixed vocals place each performer under the listener’s microscope and Gun Outfit manipulate such exposure with deliberate mistakes. It reinforces Hard Coming Down’s intimate melancholy. Keith and Sharp display their flaws, shrug and invite listeners to inspect up close, as if pulling up a bedside chair for the audience to witness Gun Outfit’s private lethargy and resignation.

Hard Coming Down articulates a bleak environment and insular sadness with wise aesthetic choices to accent its depressive themes. Perhaps the final track, “Songwriter,” is the most telling. Sharp’s lead vocals drawl “such a sad little songwriter / so many songs/ but you can’t feed yourself.” He is the subject of his own gloomy critique on the role of a modern songwriter, although Sharp might imagine himself role-playing, and the self- referential track is tucked dead last, as if it's the hidden source of Gun Outfit’s neuroses informing such beautifully miserable songs.