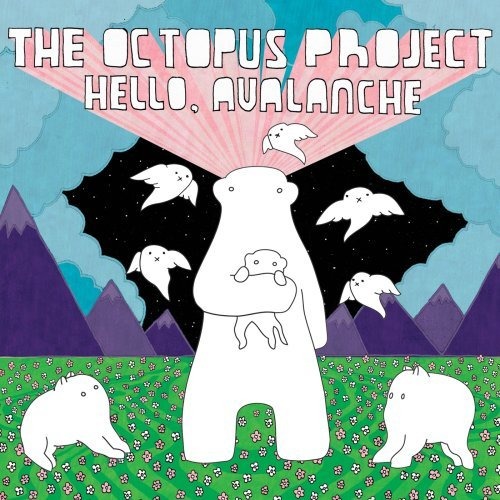 The Octopus Project are self-proclaimed noise-rockers who could fall into any number of genres, whether electronic, indie-rock, jam-rock, or post-rock. Fortunately, Hello, Avalanche contains fragments that will appease fans of most of the territories they’ve covered in the past. Along with retracing old ground, the album allows further space for what separates this band from most other electro-based bands- Yvonne Lambert’s virtuosic use of the theremin. It’s all over Hello, Avalanche, taking over duty for what previously might have been a dependable keyboard part and leaving the rest of the band to fend for the “noise” and “rock” they’ve also devoted themselves to.

“Snow Tip Cap Mountain” starts off the album and hints at the beautiful sonic landscapes that will appear later in songs like “Exploding Snowhorse” and “Queen.” “Truck” then propels everything into motion, with a driving beat, keyboard hook, and soaring guitar which is reminiscent of their explosive live show. In actuality, this album, more so than any in the past, tends to capture the spastic and unpredictable energy of their live performance.

Hello, Avalanche takes you through a series of sonic territories environmentally related in their devotion to melody. Indeed, the sequencing seems to build with purpose towards “An evening with Rthrtha,” which presents one of the most memorably anthemic melodies I have ever heard from this band, built of overlapping layers of theremin. It’s by the strength of these hooks that Hell Avalanche can remain engaging despite suffering The Project’s penchant for reptition. Even “Loud Murmuring,” centered on a guitar pattern repeated throughout the course of the song, fills out with an evolving cloud of instrumentation, even as the guitar melody renders it fundamentally the same throughout.

Because of these unique arrangements, The Octopus Project teeter on the edge of a variety of musical styles and genres, never landing in one specific place. Without the organic instrumentation it wouldn’t sound as much like post-rock, and without the electronic beats and interspersed theremin, it wouldn’t sound as much like noise-rock, and this ambiguity is what becomes their sound. A sound that becomes easy to lose yourself.