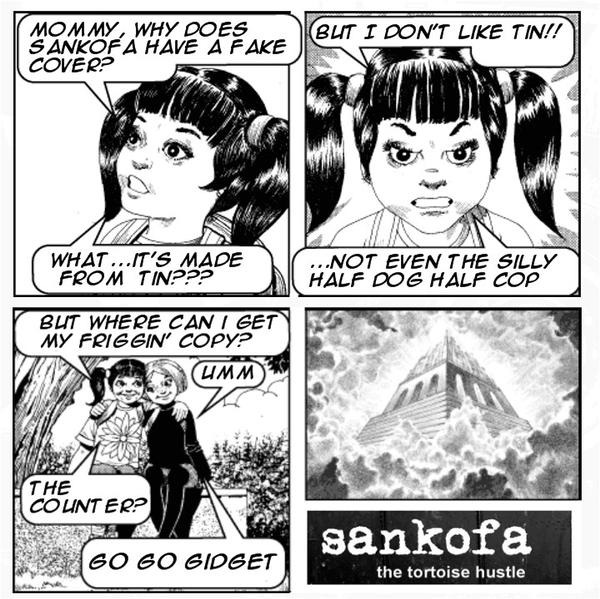 For roughly five years I have owned a t-shirt boasting an image of a cookie cutter business man holding a suitcase in one hand and raising a power fist with the other, the words “My posse is on Wall Street” below him. People smile at my shirt and think it is clever, but no one knows its origin or why the back reads “White Collared Criminals.” Six years ago underground hip hop wasn't in basements, dingy clubs or even sewers. The underground was the internet.

Sankofa, former member of the White Collared Criminals, is part of hip hop’s digital generation, a collective that has used the wonders of the internet as its stomping grounds. When the city of Fort Wayne, Indiana is mentioned, I never think of a “hip hop scene,” but that is where Sankofa claims his set. I have not even been to Fort Wayne, nor has Sankofa been to my city, but I own his t-shirt.

His latest solo offering, The Tortoise Hustle, bursts at the seams with an energy that lagged in his previous efforts. In past works, Sankofa’s writing seemed complicated to digest. The truth is I no longer cared for the clever packaging that took a delicate hand to unwrap; I had shifted into a hunger for instant gratification — probably following hip hop’s trends. No one cares for a curmudgeon that refuses to change with the times, and Sankofa seems aware of this as his new record is lyrically less dense and aurally precious.

In the press package Sankofa said his producer, El Keter, called The Tortoise Hustle his “Atmosphere record.” I am resistant to this comparison. This album is Sankofa’s compromise between Aesop Rock and Atmosphere and Big Daddy Kane. He is less cryptic, prepared to give a piece of himself, but has not lost his boom bap sensibilities.

On the title track, Sankofa gives a heartfelt opinion of convenient revolutionaries over a pretty piano track. On the chorus, he leaves his heavy toned style, giving a Slug-like sung hook a chance with, “There's a stack of looseleaf with batches of thoughts / A couple lines here, a half verse there and I’m lost / it’s another day, I'm just combing through the pieces / the tortoise hustle continues.” It doesn't quite have the tingly popish vibe of Atmosphere’s “Modern Man’s Hustle,” it is more fitting of Sankofa’s obtuse style.

On his ode to shell toes, “Speaking in Tongues,” Sankofa laments that he “been living in an adidas oasis since DMC walked down the steps with no laces.” Sankofa and El Keter even take it back to Dapper Dan with “The Zoom Zip,” as Keter does his best Marley Marl impersonation above an erratic bass line and funky drummer break beats.

On “And It Goes” Sankofa conjures the rhyme patterns of his former partner, Jon?Doe, with a mesmerizing rhyme-every-word-flow, but instead of cluttering the song with an equally twisting chorus, he lets up on the listener, retreating to soft humming and a quiet repetition of the phrase “and it goes…”

With its loosened grip, this album may be Sankofa’s finest offering. Still, the record is not without fault. Despite an album of Marley Marl tribute sounds or soulful horn-blasting bangers, there are a few unwelcome time warps into the old underground territories of soft-drummed chamber music that pull the record down. (The lyrics to every song on the album are available at obeseamerica.com for those dense moments in the record.)

Five years ago, I listened to dozens of internet famed emcees, desperately searching for that “real hip hop shit” that I could not access in my local Ohio cities. Looking back on that time, a handful of the emcees I considered influential have made it through the hustle. If you asked my eighteen year old self if I thought Sankofa would be one of those emcees I still listen to in five years, I probably would have said, “Naw, but I can not wait for a Yak Ballz solo!” Sankofa proves that slow and steady wins the race with The Tortoise Hustle; hopefully he sticks to his claim of “Been in this since ’98, there’s no turning back.”