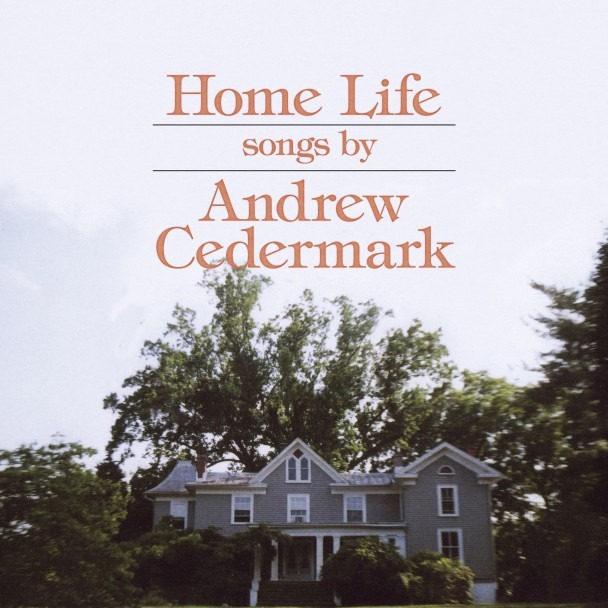 It was Rufus Wainwright, a musician with almost nothing in common with Andrew Cedermark, who reflected, “Go ahead, accuse me of just singing about places”, on his mammoth ode to self-destruction “Cigarettes and Chocolate Milk”. Cedermark, the artist in question, refines the idea of the disasters that lie inside, calling the geography and his second LP, Home Life. Appropriate or not to his fascination with demarcated interiors, Cedermark, divorced from Titus Andronicus a few years back, citing the demands of life on the road in a touring rock and roll band. Perhaps even Cedermark's solo career can be viewed through this lens: the pleasures and perils of home, an attempt to untangle the process of growing up and getting away. True to form, Home Life, achieves a level of intimacy and rawness uncommon in independent rock music, a record about terrible places that never leaves the image of the house.

Cedermark's material betrays the trappings of home recording – done in upstate New York and New Jersey – and the sophistication of delicate production. This duality allows his sometime shabby, sometime Byzantine arrangements and structure to glow with a filtered and earnest warmth. Opener “On Me” hints at a bad joke about Bill Withers only to find Cedermark's shrouded, languid locals chasing a wilting guitar line around a lyrical portrait of the most depressing dollar beer night ever attended. Both singers prove correct: We all need someone to lean on, though Cedermark's universe is one of “solo trees and house, a snake in every garden, where nothing depends on anything anymore”. This brand of intimate, suburban nihilism illustrates the arc of Home Life, the artist trapped between the road and home, maybe even between the recording of the record and the production of it. It's pretty to be left so alone, to be let so deeply inside cloistered confines, to have it done so publicly.

At his best on the most focused and unwound cuts, Cedermark finds moments of evocation and excellence on the slow-drive, anti-shanty love song, “Canis Major”. Nominally about the tangled sheets of his bed, and the tangled fabric of the relationship with the girl tangled in them, Cedermark closes with typically blithe masochism: “Ask not what you can do for your pain; ask what you can do with your pain.” The song builds and collapses to the finish on the backs of longing, propulsive guitars. Likewise, the most approachable track on the record is the open and forthright, “At Home”. Here, despite the terrors of “suburban basements” and the past – “1990” – Cedermark remarks at the song's midpoint, “I'm going home”. It sounds promising, before the artist tweaks our expectations, rewriting the same line as, “I'm going home to nothing”.

Album closer, “Men In Jail”, completes the meditation on terrible interiors. Beginning with the cover art, which could as easily be the site of a grizzly triple-homicide as any scene of domestic bliss, Cedermark's world firmly collapses on itself, the artist singing, “I wonder if, in jail, do men dream too?” It represents the closing of the internal spaces opened for the listener, a prison of his own making, a prisoner playing his own warden. All may not be lost as Cedermark warbles and wails, “The world has no use for another fuckin' idiot who aims to do no harm but can't help anyone.” It is no escape for the artist, but it offers a way out, an escape velocity for everyone else but him.