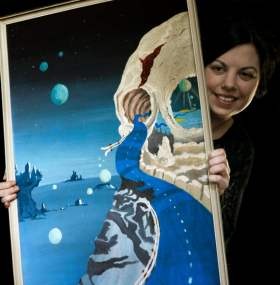 Eat Skull’s first two albums on Siltbreeze Records in 2008 and 2009 were divisive for their absolutely blown-out, beyond the red recording aesthetic and mean-spirited garage- punk and quasi-hardcore meltdowns. They were indicative of the sort of challenging rock followers of Siltbreeze expect from the label, but reached a wider audience as critics deemed them figureheads of the moment’s crop of “shit-fi” bands. Since the release of a single on Woodsist in 2010 though, output from Eat Skull has been nil.

When some of the currently most lauded rock groups strive so desperately to endear themselves to fans by releasing four albums a year, it’s refreshing for a group to seem so indifferent to listener’s expectations. Eat Skull isn’t interested in pulling up a chair for its fans, lighting their cigarette and waiting on their beck and call. Eat Skull preferred to drop out for a while at the height of their notoriety and brood in the corner, reemerging on the verge of being forgotten.

Eat Skull’s come-back effort, entitled III, sounds like it belongs on Woodsist much more than Siltbreeze. The group trades in the alienating squalor of its earlier efforts for a recording aesthetic no less clamorous, but shimmering and positive in its density. There isn’t a single oblique take on punk, hardcore or garage present on III. Instead, a pastoral psychedelia permeates the entire album. Eat Skull shed the spastic and manic skin on earlier records and instead adorned itself in a beaming West Coast positivity. Unfortunately, the group’s trajectory towards enlightenment just doesn’t suit them as well as earlier maladjustment.

“Space Academy” opens the record at a sauntering pace. It’s lush, dense instrumentation is gorgeous – even a relatively damaged guitar solo manages to enhance the positivity. “Dead Horses” is similarly light. Teardrop guitar leads pour over its relaxed pace and the vocal refrain of “watching dead horses decompose” seems cheeky in its cool delivery. “How Do I Know When to Say Goodnight” then descends into indulgent programming and studio trickery. A telephone beeps, heavily affected “oohs” run amuck, and synthesizer flourishes solidify its dream-like texture. Even the next track, entitled “Your Hate,” which seems to promise some Poison Idea-indebted nihilism, is lofty pop.

Those four tracks, which function effectively on the maxim of “add extraneous noise until complete,” are the album’s first four tracks. Then, it becomes clear that III is front- loaded. Aside from “They Burned You,” which showcases a poignant Casio keyboard melody, strained dulcet vocals, percussion that evokes a child berating a white picket fence with a toy sword and a treated tape-recording of drunken mumbling from a Portland food cart at 4 AM, the rest of III dawdles. The diversity of influences that cast such speculation over Eat Skull’s record collections on earlier albums is absent. Eat Skull’s signature recording idiosyncrasy remains, but seems wasted on the aimless meandering of most of III.

Eat Skull’s first two albums were divisive and alienating. III is completely accessible, but easy to ignore. The album’s studio-reliant psychedelic pop seems no less genuine than earlier work, only Eat Skull largely fails to channel its happier station in life into a compelling album.