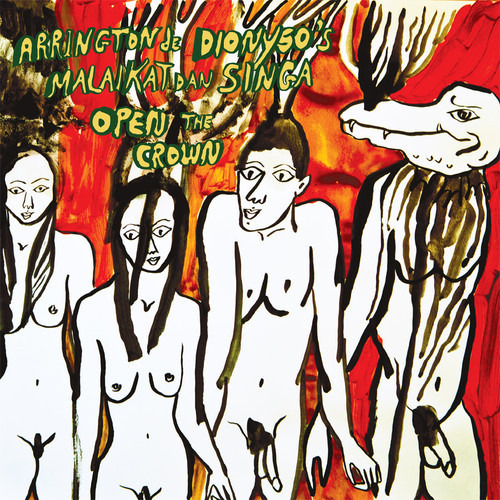 Arrington De Dionyso has fooled us all, for he is not one of us. He is a tiger and he is seeking utopia and expanding the limits of the collective consciousness. The only reason that he assumes human form is because one needs opposable thumbs to play the bass clarinet.

Open The Crown is a blistering masterpiece: both sonically ambitious yet accessible: bursting with originality while deconstructing with familiar pop/dancehall tropes. It insatiably tears through genre conventions, preconceptions and expectations to solidify its coronation as one of the most daring albums of 2013.

Artistically and circumstantially, it is a record of beginnings, rebirths, quickenings and destructions. Specifically, fire and deconstruction figure into recurrent imagery found within the album. Open The Crown marks the first Dionyso has played/recorded with a band. Crown is a loaded album but one with “absolute clarity of vision”, in De Dionyso's own words. It’s has wild sounds but burns bright with an unwavering intent. Every note played and every lyric sung just sounds like they mean it so much. Though the record maintains a psych-trance punk sound that fans of De Dionyso will recognize, Crown finds a curious middle ground: the sounds aren’t weird for the sake of alienation but just weird enough to captivate.

The appropriately titled “I Feel the Quickening” is an apt metaphor for the conception of a new energy and consciousness. The drum kick, like some kind of hysterical fetus, is impossible to ignore as cymbals hiss while the bass murmurs like a heartbeat. De Dionyso's incantatory vocals have him sounding like a preacher of sorts. A refrain of falsetto shouts make the listener feel like he has slain the spirit. Through a sneering guitar line he sings, “Voice and vision/in collision/all my senses boundless/all my senses disorganized… I make a moon from smoke/I carve your initials into the face of the sun”. It's like if the disciple John wrote the Book of Revelation while listening to the Stooges. The chorus—”I feel the quickening in everything that lives/in this life I see everything that lives”—with such an urgent musical vendetta that staying still quickly becomes a non-option.

“I Create in The Broken System” has a heavy impact that belies its sonic minimalism. The lyrics work like an artist’s manifesto while also encouraging—or demanding—that art is redemption and freedom. The indomitable rhythm section keeps a dancehall-esque groove throughout the track; the rhythmic launch pad for the ascent of De Dionyso’s visceral lyric howls. What results is an infectious, hypnotic trance that connects seemingly contradictory vibes: all in one track, “Broken System” is an excitable clarion call laid over a laid-back beat; it’s amped up yet deliberate.” “What cha gonna do with a raging tiger/don’t run away from a raging tiger.” Creation is always the answer when the question is posed of how to “break away from the chains that bind you”—as De Dionyso sings: “Fix the system with the broken down rhythm.”

Of decidedly slower fare, “There Will Be No Survivors” rolls in with a sparse drum beat and subtle yet insistent bass line punctuating De Dionyso’s pre/post-apocalyptic croons. It still retains Crown’s animalistic mood; strangely feline in its prowl and deliciously serpentine in its sinuous delivery. “Your kisses taste like honey”, he sings over a bleating saxophone riff. “Tak Terbatas (versi Iblis)” has De Dionyso singing in Indonesian but the sheer madness and intensity of his vocal delivery is definitely not lost in translation. This is a bombastic punk raga jam, demonstrating De Dionyso’s knack for calculated musical frenzy.

The title track, “Open The Crown” is an unyielding call-to-arms that starts with terse guitar strums until the drums come in thundering in like a badass, moody tantrum; no studio effects to be had with this song. During live performances, seeing drummer Jake Jones assassinate the skins with rumbling abandon (and even the calluses on his hands post-show) is a mesmerizing spectacle. “I teach by example/ten thousand tigers in my temple”, De Dionyso wails; “no cage can hold us/I am wilderness unfettered.” Malaikat dan Singa is, in no way, shape or form, fucking around with this track.

“Jiwa dari Jiawku”, all hyper and wild, boasts a drum beat in a five-count which might be polarizing to some if it didn’t give the song such a refreshingly angular edge. The ominously sexy “The Akedah (The Moon Is Full)” lives in a rolling fury of quivering guitars and pounding, echoing guitars. “Some might say that I’m lost but I have no destination” is seductive and sinister initiation to a ceremonial pace that will make you swoon, if not allow you to catch your breath from dancing to the fast-paced songs that preceded it. “I Manipulate the Form’d and the Formless” close the album with another first-person lyrical statement while Arrington spits anarchic poetry in what could be called an experimental hip hop beat loaded with bravado over a miasma of disparate sounds.

Open The Crown delivers a heady array of sounds, influences and moods but never sounds cluttered or chaotic. Arrington De Dionyso’s Malaikat dan Singa has without a doubt crafted a compelling punk record that transcends the oppressive, fearful symmetry of genre and garish arty pretensions. As Crown prowls and pushes the boundaries of sound and mind it leaves an indelible mark on the listener and experimental punk music itself. Not bad for a tiger at all.