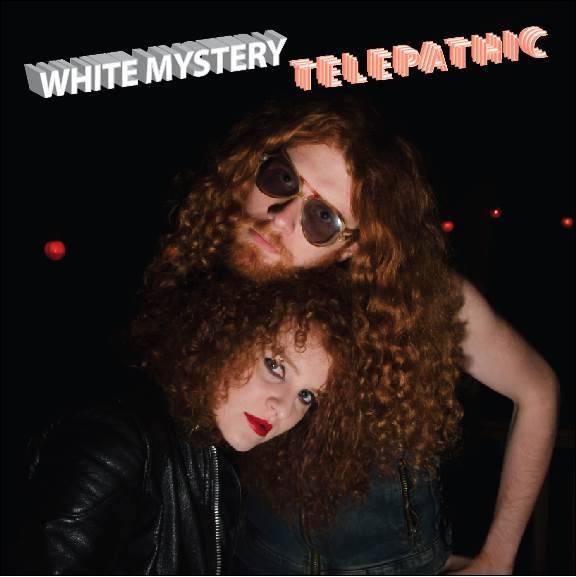 White Mystery make fun look easy in a way that still sounds tuff. They shake their beautiful sunset heads against impending doom. They spit while they smile. They sing songs about birthdays even when it's nobody's fucking birthday. The red-headed duo embody the spirit of feral children running reckless into the night, taken with a shot of sly humor and made unforgettable by unstoppable, hard-hitting beats that can only be described as totally awesome. TELEPATHIC is another chapter in the same book for WM — thankfully, these back pages are made of gold. If Blood & Venom was about birthday parties and food, TELEPATHIC is about wild nature and inside-your-skull psychedelia, steeped in the pair's infectious playfulness.

Whether Alex and Francis White are screaming like poisoned felines in the nerve-splitting “Junglecat,” repeating “I am a Butthead/You are a Butthead/We are Buttheads from Mars,” or telling you to “Break a Sweat,” the brother-sister duo's latest album has the almost unimaginable endurance necessary to keep their party-starting, high-energy tunes at full force. Each song takes a line that starts with a giggle, then repeats it so many times, building it into such heavy tunes, that it goes from silly to surging — wailing, screeching, and releasing. The secondary, almost accidental-seeming theme of the wild wild out-of-doors hits its peak with “Live to Hunt,” a song that urges you to “drag away and bite your prey,” but reassuringly, Alex may be singing about “biters” as it relates to rap, not rabies.

More so than their last few albums, every song on TELEPATHIC is memorable, each unexpected turn of phrase sticking in the brain like a welcome thorn. All brought to you by the sunny side these Chicagoans live on; one that includes a bit of a quasi-fifties, “I Want Candy”-esque bounce under the rougher stuff.

“Hey Shirley” is the only number that completely breaks the fuzz — an uncharacteristic dive into the mellow and moderate that finds Alex White singing with a sweetened sha-la-la. It's a break from the body-rocking, half-yell she's a bit more comfortable wearing (Alex does the number proud), making it an easy standout in TELEPATHIC moments – smooth and sultry.

The two crazy-hairs may have already been struck by the lightning rod of fun too many times, but they still know that the best way to find a good time is to make it yourself. TELEPATHIC is another great time with a growl, baaaaad enough to make you boogie down.