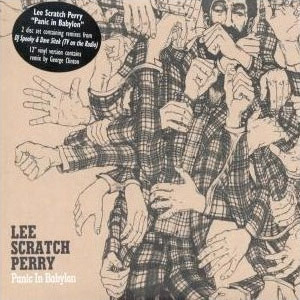 It’s not necessarily common knowledge, but when Lee “Scratch” Perry isn’t producing other people’s music or casually competing for the title of Most Bugged Out Human of All-Time Ever (or deftly doing both at the same time), he’s still recording his own original material: a habit that is probably more than second nature after more than 40 years of making music.

40 years is a long time in music industry terms perhaps, but there is something ancient and shamanistic about Perry’s vibe and music on his new offering Panic In Babylon that transcends ideas like “a long time”. 40 or 400 are just numbers in Lee Scratch Perry’s swirling, cosmic milieu. While we’re struggling with the passage of mere hours at 9 to 5 jobs, Perry is exorcising devils: “rewind unpure spirit” he implores on “Purity Rock”, fusing reggae jargon and holy scripture. While we’re attempting to exert control over our day to day lives, The Upsetter (as Perry calls himself) needs only 6 minutes of dub witchcraft and a few nods to Marcus Garvey to “Voodoo” Tony Blair, George Bush, Colin Powell, and the Bank of Montreal among others.

The musical backdrop to Lee Perry’s mindscape here is, not unexpectedly, a soaring tapestry of echo, spacey sound effects, shuffling bass, and that familiar keyboard vamp that nods the head and gradually leads the listener back towards the dubby undersea cave where all this stuff emanates from. Its effect (and, almost assuredly, its origin) is druggy and contemplative, but the disc is not without sonic relief. Album opener “Rastafari” finds Perry synthesizing Bob Marley lyrics and dropping references to Hindu omni-God Shiva (Perry, apparently has picked up some Hindu/Krishna mysticism along the way- his bio notes that he was married to Swiss millionairess Mirielle Campbell in a Hare Krishna temple) over a propulsive track-his band, The White Belly Rats, assist with horns that join that nodding key vamp to let the sun shine through the clouds of ganja smoke.

Ultimately, one sort of has to be along for the ride on this. Oh yeah, you probably aren’t performing musical exorcisms or raining down supernatural Krishna-prophetic indictments on world leaders (check “Baby Krishna”) because you have a need to, say, rationally coexist with your surroundings and fellow human beings. This might not be the album to put on shuffle in your iPod for a busy day of running errands around town. No, Panic In Babylon is more like visiting the planetarium in the middle of the afternoon on a weekday. The world outside swirls in the background as our tour guide, Lee “Scratch” Perry, pilots his Millennium Falcon through the outer cosmos, taking the time to fire a few parting shots at the inferno Earth that fades into the distance with each passing track. With the wrong person at the controls, this voyage could go hopelessly amiss. Fortunately, we’re making the jump to hyperspace with the Han Solo of dub reggae.