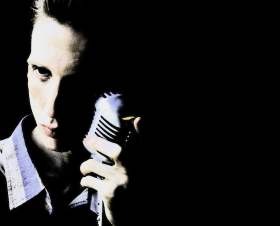 Over the past decade, Bradford Cox became one of the most prolific songwriters in indie-rock. Fact. He also happens to be a workaholic, constantly offering new music at a rate that only Ryan Adams can rival – minus the two-year hiatus. But as Cox grows older, his sound and identity take on an even fuller form that previously would seem unimaginable. While Logos dabbled heavily in shimmery compositions with the help of a few impressive guest features, Parallax strips those layers away, placing Cox front and center, as uncomfortable as that may be.

With that in mind, it only seems appropriate that Parallax opens with a song titled “The Shakes”. On it, Cox morphs into a vintage pop-star – see also: the slicked back hair/hand gripping the classic mic stand on the album cover – while sardonically exploring a lavish contempt for fame and money. Sonically, Cox eased up on the hard-to-approach experimentation. It's still there, he’s just merging both worlds into one, unified habitat.
While Atlas Sound gives Cox the freedom to do whatever the hell he chooses, “Te Amo” proves that Atlas Sound and Deerhunter hold a few common links. Most noticeably, is the songs slinky-like keyboard progression that could fit in easily amongst last year's Halcyon Digest. “Mona Lisa” first appeared on Cox’s Bedroom Databank vol. 3 almost a year ago. Thankfully it reappears in finished form and features MGMT’s Andrew Vanwyngarden. “Mona Lisa,” hands down, is one of the best songs we’ve heard from Cox.
Towards the end of the album, things fade off, pushing the listener's level of patience. “Flagstaff” is lush and decorative, but Parallax can do without it. The payoff is “Lightworks”, an album closer well worth the wait. “Lightworks” features a retro, tremolo-riffed rhythm with Cox singing in a hypnotizing falsetto that lilts throughout the chorus.
From the beginning of Parallax to the end, through its imagery and lyrics, Cox eplores a certain fascination with the past never pursued before – at least this evidently. What’s most impressive about Parallax is that while Cox coincidentally may be looking back for inspiration, he also happens to be pushing things forward.
PrevPreviousYou People Can All Go Straight To Hell – Pygmy Shrews
NextSo Outta Reach EP – Kurt VileNext