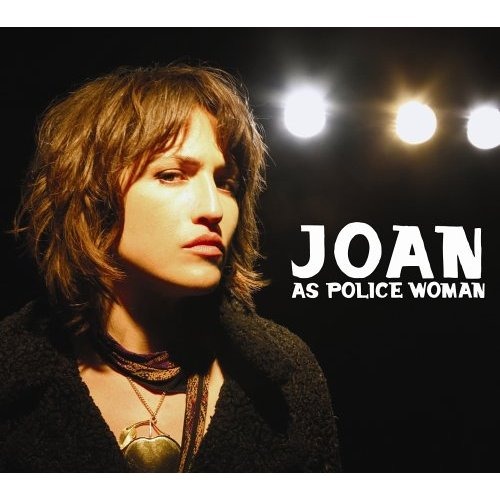 Joan Wasser, 36, has spent the last decade supporting such notables as Antony and the Johnsons, Rufus Wainwright, The Scissor Sisters, Nick Cave, Sparklehorse, Sheryl Crow, Lou Reed and Depeche Mode’s David Gahan with her violin and background vocals. After studying music at Boston University, she put in some time with her peers in The Dambuilders and Black Beetle (which she formed with two of Jeff Buckley’s band after Buckley, her boyfriend of three years, suddenly passed all too soon in 1997).

Now we have Wasser’s solo debut, with what many are calling one of 2007’s best album, Real Life. The album, released by Reveal Records and coming to Wasser’s native U.S. a year after its UK release, bears the band’s name, Joan As Police Woman, after a friend’s observation that Wasser resembles Angie Dickinson, star of That 70s TV Show.

Antony (of “and the Johnsons” fame) repays his debt to Wasser on the soulful and sexy duet “I Defy,” while a gospel choir swallows Wasser’s taunting voice into a cohesive whole on “Eternal Flame.” A gorgeous violin helps Wasser (sounding much like Squirrel Nut Zippers frontwoman Katherine Whalen) serenade her at-first-sight lover on “Flushed Chest,” the ultimate crush song, while a screeching viola texturizes Wasser’s mourning with emotive cries on “Feed the Light.” Indeed, a haunting viola thematically strings (pun intended) the album together, song by song.

Other amazing songstresses are elsewhere evoked by Wasser’s staggered, lingering voice: “Save Me” calls forth PJ Harvey with a poppy, radio-friendly post-breakup suicide tune, while traces of Chrissy Hynde are evident in Wasser’s pleas (“Why won’t you just fall in love with me?”) in “Christobel.” But perhaps the most direct concentration of Wasser’s power may be located in the title track “Real Life,” in which her vulnerable, faltering voice soars with intimacy as she reminds us of the real-life responsibility and joy we should take in our loved one right now: “I’m real life. You’re real life. We’re real life.”

And I thought it was just a gorgeous dream…