Through the Gash – Hannah Fury 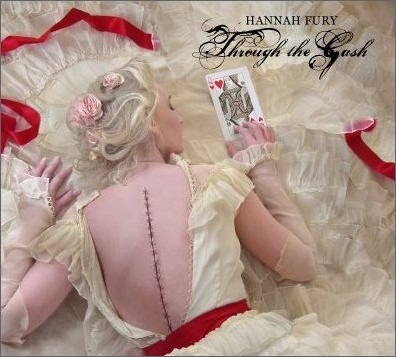 With lyrics stolen right out of your pre-teen cousin’s poetry diary and a voice like a choking sparrow, Hannah Fury gives you all new reasons to make fun of goths. Or maybe just the same old reasons. Perhaps you can pull off suicide girl show tunes if you’re someone like Amanda Palmer and dump a healthy dose of irony and self-awareness into the pewter cauldron. Fury’s latest album Through the Gash, however, is unmixed. It’s pure and unadulterated whiny-girl goth.

Thing is, without the wit of a Tori Amos or the balls of a Kate Bush, playing on female angst is a dangerous thing. All those bipolar shifts, passive-aggressive dependencies, push-and-pull love urges, it’s amazing just how boring it can be unless done right.

A lyrical sample, from “defenestration” (which, oddly enough, is not about the 1618 Defenestration of Prague): “You want to walk straight down the line / I just sway from side to side / Coming at you like some tattered corpse bride / Coming at you, so stand aside.” An excellent use of rhyming “side” with “aside”, but where’s the mention of “death”, “flesh”, “blood” or “poisoned”? Can’t be goth without those.

Oh, they are: “Those we loved have seeped into our poisoned blood / Girls that glitter deceive death / We thread ourselves through innocent flesh.”

Apparently Ms. Fury has been doing this for years, independently-produced, banking on her piano work and warbling voice to carry her where adequate representation won’t. Much of the piano work here is drowned in synths, so you can’t really gauge the extent of her talent under the gloss, but it does sound like she’d be more suited for open mic night at your local darkwave Barnes and Noble than a CD that you had to actually pay for.

True to its roots, the instrumentation consists of the three basic staples of gothitude: a drum machine left over from the ’80s, a synthetic organ also from the ’80s, and samples of various funhouse machines. In fact, the album's most interesting section occurs at the end of the last track, where the music breaks down entirely into one of those carousel pipe organ songs. It’s like escaping from the house of mirrors, head spinning, and finally seeing something recognizable. Ah yes, the carousel. Not terribly exciting, but even leering painted horses and dolphins are less horrifying than this album.