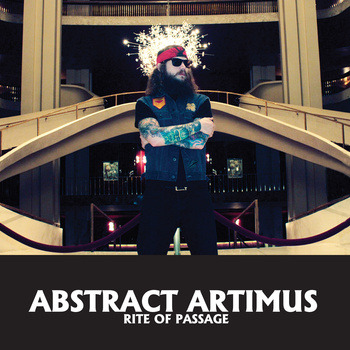 Artimus Alexander was born in Jacksonville, FL., and his father was the drummer for the Jimmie Van Zant band. As a child, seeing his dad play music for a living was a constant, and it wasn’t long before young Artimus was also playing music and performing live. Eventually, he settled into a band called Fry Cook, which lasted until 2006, when the first version of AA was born; and, legend has it, their first show was opening for Gwar.

He then moved on to a one-man-band project where he would bring in other musicians as needed. Now living in New York City, Alexander has released numerous records in the last several years, including 2009’s God Is Mad and 2010’s Barba de Dendritas. This time he plays everyone the album, and he recorded it in the bedroom of his Manhattan apartment. The damn-the-torpedoes, boogie rock-and-soul dynamic is present on this one from the opening chords, as he blasts off with the title track opener, and sets a fairly high bar, but he has no problem hitting it again and again. “At Large” stays the course, mostly, but it shudders with the ghost of Nirvana for a moment or two. “Quitter’s Face” is an eccentric piece of work, sort of akin to the general sound of the Buffalo Killers. “Destitute In Vestibule” is off the charts cool, and one of the songs of the year, in my book. And for the adult-alternative radio crowd, “Anger and Envy” is suave, White-boy bluesy like The Black Keys.
There’s a loose groove to all of this that stays in place throughout the entire album, despite the fact that every song takes on a different sound. The one other notable comparison that jumped out is the underground duo called The Medea Connection, known primarily for one song, “Black Soul of a New Machine.” That song feels like a disconnected touchstone for this album. AA has a knack for cranking out grumbly but engaging tunes of gritty, existential angst, and no one else is doing this kind of thing any better right now. Rite of passage, indeed. This album should become a staple on college radio, but in this absurdly fickle world we live in, who knows?
PrevPreviousGlowing Mouth – Milagres
NextBarfly – Rocket From The TombsNext