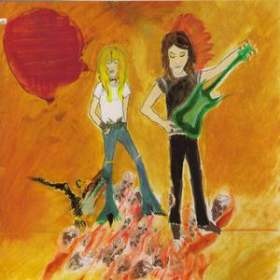 When they “formed” Royal Trux in 1985 Neil Hagerty (previously of Pussy Galore) and Jennifer Herrema (who was sixteen at the time, and later became the original Calvin Klein heroin chic model of the 1990s) appeared to be a mystical musical marriage, made somewhere between junkie heaven and hell, depending on your perspective, but with a bizarre synchronicity unmatched by any other underground musical couple of their day. (There are dozens of them now, it seems.)

Neil’s chopping up of rock guitar-isms into gnarled pieces of discarded sonic debris and Jennifer’s grunting and growling struck some people like a fresh bite of Beefheartian avant-noise rock protein after a decade of synthesizer saccharin. The two of them found a joint venture that suited their fucked-up experimental sensibilities at the time and they explored a lot of it during their time together. The earliest material barely keeps its shape as music, the two of them creating songs with whatever was in the room at the moment. As a band they eventually expanded beyond a duo, but they never landed anywhere for more than a short stint.

In 2001, after nine albums, and a move from Drag City to Virgin Records with ensuing label drama, Neil and Jennifer went their separate ways. Neil became a solo artist, after a while Jennifer would carry on as RTX, and go on to produce numerous other bands. This 2-CD re-issue of their “boxed set” captures much of their elan vital. From free-noise experiments like 1988’s “No Fixed Address” (the title could be their motto) to 1994’s fully deformed “Mercury,” it covers enough ground to be a legitimate introduction. And Neil’s odd “evolution” as a guitarist runs from the early gauzy guitar glaze on “Baghdad Buzz” to the will-he-hit-the-beat-on-time-or-nod-off guitar riffing that mainstream critics would fawn all over, before the post-Virgin backlash. That inebriated, shambolic style of rhythm playing brought about comparisons to Keith Richards and the Stones of the early 1970s, because that was all some mainstream music writers could relate to, but Royal Trux were removed from the shackles of normalcy on most of what they attempted, and one can’t tell what is purely spontaneous and what is pre-meditated, especially with Jennifer’s tricky vocals.

She doesn’t really sing, she expectorates, coughing out bits of sound and spitting out unidentified syllables. “Teeth” is a gritty example. They may go from arid to humid in a flash, from the super-sparse “Cut You Loose,” with Neil on vocals and piano to the fleshed-out boogie rock of “Cleveland.” There are some fleeting, hidden gems: the pots and pans percussion heard most prominently on the Patti Smith-like talking blues, “Statik Jakl,” the uncanny “Hair Beach,” and the flat-out excellent “Law Man.” There’s a freedom in everything they do. Are the sonic dissonances and disorder accidental or purposeful, or both? In the end, it doesn’t really matter. It was all part of what made Royal Trux so fucking odd and compelling.