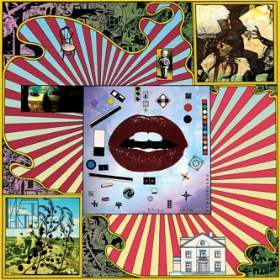 Wet Hair’s new album, Spill into Atmosphere, with its entreating vocals and percolating keys that pervade each sprawling track, is its most accessible work to date. Yet, it’s the remnants of earlier experimentation that prop up the keen pop sensibility. Beneath the warm delivery and saccharine keyboard leads are unconventional instrumental performances that create an unusual backdrop for such fine song-writing. The result can be disorienting for listeners striving to pigeonhole Wet Hair’s influences. The long, earnest vocal drawls recall a number of bookish, hyper-literate English or Australian pop from the 80’s, but there is nary a straight backbeat on the entire album. The bright, gushing keyboard melodies resemble any number of indie pop groups, but the dense, psychedelic backdrop waivers the accuracy of those references.

Spill into Atmosphere is comprised of only seven songs, but they total a substantial 40 minutes of music. The longest, “Jane You Don’t Decide” is more than eight minutes but it plays like a mash-up of one concise pop song and one murky psychedelic jam. Assertive keyboard melodies swap measures with protracted vocal phrasing and then descend into pastoral instrumental breaks. The elongated, effervescent passages are unique for their ability to still impart the inherent violence of rock ‘n roll, rather than noise strictly made for drugging to, as goes the usual trappings of modern psychedelia.

Next to the vocals, keyboards play the most vital role in propelling the pop inclinations on Spill into Atmosphere. With bleak, washed out tones being nearly ubiquitous in trending modern groups, the hyper-active positivity of Wet Hair’s keys is a refreshing change of pace. The keyboard performance is versatile as well, with the ability to alternate between fizzing, major key leads and psychedelic textures, or incorporate the two at once. Even in the lengthier songs, the keys maintain a seamless continuity, and compliment the vocals as well. Whether with percolating, staccato chord progressions or ascending major scales, the gleeful keyboard leads seem universally appropriate beneath, before or after the inviting vocal delivery.

The first track, “Grey Palisades,” begins with a gripping drum break that confuses momentarily by straggling along like something between a skipping trip-hop CD and modern breakbeat chilled, thus defining the percussive theme of Spill into Atmosphere. As the other instruments are layered above, the drums become increasingly clamorous and volatile. Like every song on the album, a concise backbeat would suffice, but the drummer is more inclined to 16th note fury and intermittent jazz fills. In description, it sounds like math-y self-indulgence, but the fickle drumming is obscured enough in the swirling production to rest unobtrusively beneath the melodic keys and vocals. The bass is similarly unconventional, but once the rhythm sections settles into the album, the last few songs feature a drum machine and another blow is dealt to listener’s preconceptions of pop.

Refusing to rely on pop tropes while deliberately writing catchy songs is what gives Spill into Atmosphere its enduring charm. The oblique approach to writing pop negates listeners’ attempts to codify and compartmentalize the music. The audience is coerced into grappling with Wet Hair’s sound by its unpredictable, fickle qualities and the seemingly disparate musical techniques being so tastefully blended together.