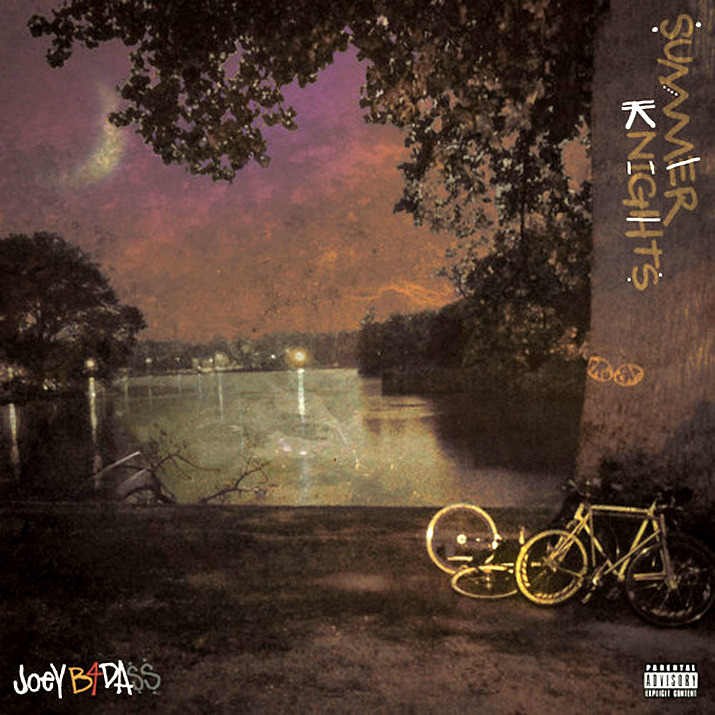 Originally slated for a mid-June release, Summer Knights was billed as the free EP expanded into full mixtape, the prelude to B4Da$$. Pushed to a July 1 release, Joey Bada$$ took two weeks to bolster the mixtape into 16-tracks (adding previously released “Unorthodox” produced by DJ Premier). With the rumors of official debut B4Da$$ slated for 2014 rather than the previous fall 2013 timetable, Joey talked of needing to finish Summer Knights as though it took precedent to the debut. So why does Summer Knights retread on the same formulaic faux-revivalism employed on 1999?

Summer Knights is not going to ruin your day, nor should it deter from Joey's official debut. Just as 1999 was strong but dragged, this should have remained an EP. Slimmed to 8 songs, Joey B sticks to in-camp production, “Reign” and “#LongLiveSteelo” come sooner, and return spins are less of a chore.

Doom, being a villain, giving Joey a used beat for “Amethyst Rock Star” is the genesis of why Summer Knights falters. Joey might as well stick to the mixtape routine of thumbing through the Special Herbs Boxset. In the past year the best records continue to be & LPs, culled from heavy mano-a-mano record sessions. Artists like Meyhem Lauren, Action Bronson, Prodigy, and Smoke DZA have benefited from sessions with Harry Fraud and The Alchemist. The high profile producer appearances on Summer Knights feel like courtesy offerings – throwing Joey a bone, but not treating him to a full course meal. Statik Selektah did his 90s revivalist thing with Joey on “Word Is Bond”, but it sounds plucked from the cutting room floor of Extended Play. The Alchemist tossed him a beat for “Trap Door”, and it literally feels as though that was the extent of it – no guidance, no brainstorming session, no beat tape to choose from, but a discount beat in the inbox. Meanwhile his Pro.Era crew, along with affiliate Lee Bannon, is buffed clean. On a quarterly basis, Lee Bannon explores the depths of trap wave with a new EP, he’s got production on last year’s Fantastic Plastic worth jacking over the selection on Summer Knights. Bannon and Chuck Strangers showed a wealth of weirdo-character on Super Helpful’s free The Help EP alongside Kwame, but stick to the 90s playbook here. It’s as though left to their own doings, boundaries are pushed and creativity reigns, but Bada$$ is monitored like the prospect who can’t risk injury playing pick-up games with his friends.

In interviews with Rolling Stone and Impose, Joey Bada$$ talked of being into more than just 90’s rap. He lists Daft Punk and LCD Soundsystem as two of his favorite artists outside of rap, but even a mixtape – the creative space in which beats are jacked and studio jokes become public domain – is under strict code for Bada$$. No one criticised King Chip and Kid Cudi for doing shrooms and rapping over LCD’s “Dance Yrself Clean”. Why can't one of the talented beatmakers in his camp produce something similiar, if Joey is into dance-punk? Why not engage Rat King and get to the no wave source? Knowing Saul Williams' debut record Amethyst Rock Star, referenced in title and sampling William's “Wine”, reached Joey's ears should be a positive for his artistic development. What follows though is reduction of Saul William’s opus and Rick Rubin-produced debut to three meaningless words chanted between verses. For what cause? It’s as though Joey just likes the how it sounds, but has given no thought on Saul’s original intent. Throughout Summer Knights, there's hints of a higher learning in Joey Bada$$. He's collaborated with free thinkers like Ab-Soul (an effect that lingers in Joey's writing) and knows who Saul Williams is, but their influence is feather weight understanding rather than absorption.

With no risks taken Summer Knights can neither better nor harm Joey Bada$$. Courtesy production aside, its greatest fault in the big picture is distracting Joey from his greater task, completing an official debut. Summer Knights exists to gain no new fans or critical eyes, only hovering in the vacuum of Livemixtapes and DatPiff. Rolling Stone might have done an interview, he might be out in Europe or on tour with Wiz Khalifa, but in the world of DatPiff and Livemixtapes, Summer Knights is exiled from the “featured” section within 5 days, replaced by Migos, Iamsu! and Meechy Meech.