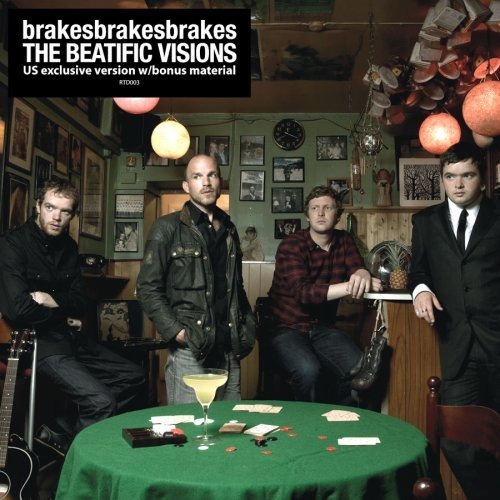 One mark of a good album is that it makes you interested in anything the artist has to say. Brakes’ debut album Give Blood featured a song I heard once and couldn’t get out of my head; “All Night Disco Party” is enhanced by the same kind of thumping beats and simple-to-the-point-of-genius lyrics that characterize some of the very best dance rock songs (see: LCD Soundsystem, “Daft Punk Is Playing At My House.”) When singer Eamon Hamilton belts out the words “Croque Monsieur! Croque Madame!” you cheer inwardly, and then you think to yourself: Am I really getting all worked up over a sandwich?

What is remarkable about this particular track is that it sounds very much unlike the rest of the band’s catalog. The rest of Give Blood features a mix of punky, spirited rock with a certain flavor of early 90’s jangle pop; it would not be unfair to make the assertion – at least in terms of melodic energy – that Brakes are the contemporary British answer to The Replacements. At the same time, the two bands are worlds apart. On record, Brakes’ sound is stylized, calculated; these are four musicians with obvious talent, playing the role of the irreverent.

Enter two new factors into the equation: the completion of Brakes’ second album, The Beatific Visions, and the subsequent US tour that followed its release. Sometime last fall, I received an instant message while sitting at work: “Get in here. Now.” At the time, I shared an office with Rough Trade America, and I scurried down the hall to find their label manager flipping out over the new Brakes record. After the first song, “Hold Me In the River,” hit my ears, I promptly commenced flipping out alongside her. “Hold Me In the River” is a perfect song in every way. It’s catchy without being saccharine, it’s driving without being forced, and it’s both romantic and political without ever getting “deep.” “I woke up late and found my liberty lost / it had been written down in lore as a security cost,” sings Hamilton. Mere seconds later he’s name checking Scarlett Johansson. The rest of the album hits as sweet and salty as that first track, ranging from complete shouting mayhem (“Porcupine Or Pineapple”) to harmonic and heartbreaking (closing track “No Return.”)

It’s rare to find an album that’s fun, compelling, and thoughtful all in one, but Brakes (now BrakesBrakesBrakes for those of us in the US, so as not to confuse us with the Philly-based Brakes) have one-upped themselves on their sophomore album. At their Mercury Lounge show on June 23rd, the songs proved themselves open for energetic interpretations that left the crowd both dancing and wanting more. The band’s appeal is perhaps best understood when compared to show openers, Brooklyn’s own Pela, who play straightforward and passionate guitar rock. Pela has never aspired to be anything other than a solid rock band, and it’s their greatest strength: they play well, they write strong songs, and they seem like nice fellows. The problem with Pela is that their act doesn’t stand the test of repetition. Every time I see them, I anticipate greatness, and every time, I truly enjoy myself for the first four or five songs…and then suddenly, without warning, I want it to be over. They are a solid band. They are a good band. They are not, however, an engaging band.

Not so with Brakes, whose shortest song is approximately ten to fifteen seconds of mayhem during which they shout Cheney’s name over and over punctuated by “Stop being such a dick!” Their mockery is blunt, to say the least. Live, each album track becomes an event in itself. Hamilton’s reedy voice is balanced out by guitarist Thomas White’s harmonies. Bassist Marc Beatty and drummer Alex White pull together one of the most in-sync rhythm sections that modern music has to offer. Perhaps the best place to see the band’s talents on display is in their inspired choice of cover songs. They invite audience females to come onstage and sing the June Carter lines of their surprisingly strong “Jackson”, and out of their back pockets they pull a short and sweet rendition of Camper Van Beethoven’s “Shut Us Down.” They’re not afraid to take on the classics or the potentially obscure, and this confidence works much to their advantage.

In the end, maybe that’s what is so compelling about Brakes’ sound: its confidence, not just in the music itself but also in the listener. Hamilton and company lace their work freely with political references without dwelling on the obvious; they’re sincere at every gesture, but with true sincerity comes a certain measure of realism. Asking “Who won the war / what the fuck was it for / Ouch!” in one breath, and cooing about a girl with “summer in her heels” in the next, Brakes trust that we, the listeners, are as willing and able switch gears as they are. Where that fails, they trust that we can understand the lyrics to their most requested live song: “Won’t you shut the fuck up? I’m just trying to watch the band.”

PrevPreviousStories About Nothing – Intuition
NextMusic From Regions Beyond – Tiger ArmyNext