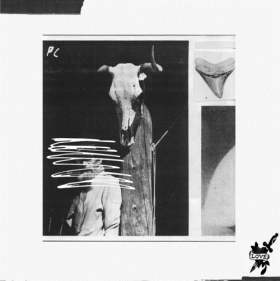 PC Worship's Toxic Love begins with an almost sub-dermal groaning, the scritch-scritch of a stringed instrument being bowed against its will. It lasts for 30 seconds, but once the creaky moans launch into the rotting country-fried steak of a guitar melody, it's clear PC Worship made a record that will bury itself under your skin like a leech's tongue.

Justin Frye, the frontman, guitarist, bandleader, and songwriter, sings in a laconic first person, and the lyrics are part ugly, Southwestern hallucination, part drug-addled resolution. The refrain is “I'll see if I can't keep my shit together.” The songs have a similar beauty to a Native-American death ceremony. Everything colludes to build tension. By “Fountains of Hell”, an A-side halfway mark, the frantic fingerpicking is wound tight, while a ghostly background tape-loop beckons the knife. It's the sound of the dirtiest jack-in-the-box in the world, and when it pops open, instead of a clown, there will be the skull of a steer.

Toxic Love was to be an EP called Southern Withdrawal, but the first pressing was recorded at the wrong speed, and all Frye had to work with was a really large amount of worthless plastic. So they returned the order, reserving a few for joke Christmas presents, and decided they might as well go the whole distance, add some tracks, and make the record into an LP.

The result is a seemingly massive chunk of cathartic, demon-influenced, fuck-it-all, gutter scum pop. A PC Worship show is a place you can let go – earlier this month, a last-minute record release was a universe of mindless hash-smoking, beer can throwing, and devotional cultic moshing. PC Worship has been playing these songs for a while, and the first track on the B-side, “Holding My Breath”, is one that is particularly better live than on the record. It's hard to record a pure, unadulterated, angry scream and make that experience on headphones as intense as it is when Frye is in front of you, exorcising the devils inside. On record, it comes off sounding a little unexpectedly doom-metal – this genre of course bears influence on PC Worship's sludgy music – but live, the fidelity is high enough to keep the noise from molding into a single block of fuzzy sound.

PC Worship includes most of Frye's roommates, who all live in a warehouse below the M train in Brooklyn called the Wallet. At least three of the people who play in PC Worship's live line-up also play in the Dreebs, who's approach to similar music is a lot less melodic. All of them are almost certainly trained musicians, or at least very practiced (seven played the record release, but the record have as few as three credited players to a song, with most everything played by Frye). Their grasp of theory is apparent; this is not just dark, grimy music, but also mechanically satisfying music.

The bottom layer is frequently a tape buzz, possibly with a sample or a magnetic twitch. On top of that, we have lots of deep, grinding bass, at least two guitars, frequently a violin being plucked or played, and often a saxophone or two screeching on top of a heavy, but notably slow drummed tempo. That last part is particularly important: PC Worship do not try to go fast, ever. Their intensity is not so much in the assault of a blast beat, as you might see in something like Liturgy. The speed is consistently muddied, adding to to the feeling that you are in the shit with Frye, flicking a lightswitch on and off in an empty room and seeing just how dark your brain can get. The record is only eight songs and 32 minutes, but it feels much longer. It's easy to keep turning it over.

Mind-altering substances are a huge part of the PC Worship vocabulary and you get the sense their use here is not for the acquisition of blissed-out love. Drugs are for escape from the shit and the mulch and the deep, but the band also acknowledges that your world can get more evil when you take them. PC Worship seem to say that sometimes getting dark and evil is necessary for your personal growth – anyone who can't see the full-spectrum of their own emotion is hiding behind a mask. We all need a record to tell us this, once in a while, and this is the best one I've heard in ages.