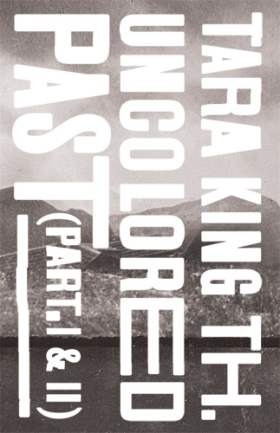 Deliciously lush, filled with ambrosial stings and strange instruments that vibrate between mystical, shrill, and smooth, Parisian quartet Tara King th.’s double-EP, Uncolored Past (Part I & II), sounds like an uncovered relic from a French psyche ward in the 60s, reinvented. Although the band’s been on the French scene since 2003, their new Moon Glyph cassette release is set to make the biggest smash Stateside. As the black rolls unfurl in that little plastic box, an album that’s soft and dreaming, not quite of this earth, slow drifts out of the speakers — a bit detached, slightly jarring, and oddly captivating.

A large part of that urge to stare comes from singer Beatrice Morel-Journel. Pretty as a New Wave film, she’s certainly something worth the sticky eyes on the screen, but even without her porcelain visage hovering in front of you, her lilting, sharp voice packs the big punch in Uncolored Past. At times cooing in a faded echo, at others stretching twang-y syllables like a sexy yodeler, Morel-Journel weaves an almost alien, unexpected presence throughout the cassette.

In “Slow Quest and Misery,” she’s calling from a distance. In “Hole of Birds,” she’s singing to herself – perhaps in some fairy woodland in the afternoon. Building on weaving whistles and pipes, Morel-Journel turns into a pied piper singing lyric-less musings into white curtains blowing in the breeze, always operating in the slightly witchy undertone of a master soothsayer, sucking us into something bottomless and unchanging.

An impossible amalgamation of all things good, “The Drunk and the Bliss” combines a sumptuous slow-dance, a spaghetti western twang, a languid, beach-y vibe, and muted- out Sixties sound that, despite its crazy kitchen sink, operates beyond the intellect of a music history junkie. Instead, it builds on the blocks of the past, creating something unassuming and maddeningly simplistic that both activates the mind and moves the hips in slow, sub-conscious circles.

Some more punishing numbers, like “Magnetic Bounds,” turning the gracious into grating as beeps repeat with far too much clarity, even as Morel-Journel works to bury them with doubled-up vocals and her best angelic sighs. Still, although the trip might be turning, it’s all in the same scene – stuck in an idyllic and surreal world where harpsichords are the hip lap candy.