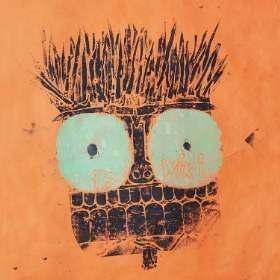 The proto-punk industrialism of Martin Rev, Fondle’em Records, and turn of the millenium underground cuts dedicated to the outlaw life of graff writers are not prerequisites in comprehending the world of RATKING, but a base understanding will place a jam in the padlocked basement door securing the gritty, New York City embeddings in the Wiki93 EP. RATKING does not sound like Brooklyn, Queens, Manhattan, Staten or the Bronx. It does not sound like musical homage, golden era nostalgia, or scene-splicing to the origins that birthed it. It sounds like the labyrinthian tunnel system caked in decades of aerosol that unites the Boroughs and has since graffiti infiltrated the Lower East Side art scene in the 80s.. It’s in the name. It’s in the claustrophobic clamor of Sporting Life and Ramon’s production. RATKING was born into it and therefor of it.

MC is not the word that comes to mind reading the names of RATKING rappers “Hak” and “Wiki”. These are names tagged in the venue bathroom, rather than the marquee board out front. These are the nicknames slung around park and subway benches where kids gather with black books; not thought out rap monikers. Wiki is the kid you expect to meet when you travel to New York City. He’s not the transplant NYU kid who hung around post-grad, bouncing through internships, but the kid born and raised from immigrant parents. His slang is as embedded as his accent, making it so 60 percent of what he says whizzes by, while the remaining 40 sounds threatening. Wiki, born Patrick Morales, is actually a well-off kid from the Upper East Side and far from ashamed to share it. Couple his upbringing with his roots in a punk band and Beastie Boys comparisons become knee-jerk.

Much like most kids his age, Wiki swears by Cam’ron (although he’s the first I’ve seen to champion S.D.E.) as a defining influence. He received deeper rap mentorship from high school teachers and summer camp counselors, like DJ Snafu from Junk Science, who introduced him to cyphering and the elements, possibly introducing underground staples like Sir Menelik’s “Nitework”, Company Flow’s “Lune TNS”, and Yak Ballz “TCK” in his ears. Whether it’s from Wiki or Sporting Life, the presence of these underground 12”s permeate the bedlam of Wiki93. But I’m letting knee-jerk reactions from growing up in the underground era at the millennial shift get the better of me.

One could trace the origins of Wiki93 to Suicide cross-bred with the Beatminerz, spoken word delivered atop jungle DPA, and even Buckshot over Showbiz production circa- Word… Life mimicked with pinpoint precision. Being pure of New York births, the melting pot philosophy is greatly at play throughout Wiki93. The web that intertwines Soundbombing to D.I.T.C. transitions without hesitation. A stuttering warp commanded by a rare Hak appearance on “Wikispeaks” harkens the oddball experimentalism of Sir Menelik’s alter-ego Scaramanga, until Sporting Life’s production finds a ‘96 mentality for Wiki to wax sapience reminiscent of Buckshot deciphering the battle between mind and body.

While I can easily slander the individualism of RATKING with a laundry list of influences as much as the next journo, I cannot speak of them beyond Coney Island to the south, Long Island City and Harlem to the north, and the bridges and tunnels that lead into New Jersey. RATKING goes no further. I can call them visionaries, as easily as I can call them lowlifes. It’s the mark of a talented group with a complex record in tow. In 30 minutes RATKING will force you to rethink real, rethink what it means to make New York hip hop, and rethink pinning down their influences.