Warm Nothing – So Many Wizards 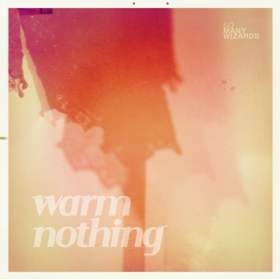 The idea of escape has become almost warped by a barrage of dreamy acts whose lyrics wind around the impossible and intangible, skating emotional catharsis in favor of indulgent fantasies. So many pied pipers leading to the Land of Nod. Grease the gates and escape is easy; cares melt quick. But escape isn’t meant to be an open door. It requires a conscious decision to disengage. Escape needs to be fought for against an adversary, even if the opposition is your own shadow.

LA’s So Many Wizards introduces a sweet hint of struggle into their otherwise dreamy debut LP, Warm Nothing. Band founder Nima Kazerouni’s childhood escape from war- torn Iran and his subsequent cross-continental shuffling may have helped shaped the band’s slightly more hard-won take on letting go and getting out.

A first for the band as a whole, Warm Nothing is preceded by Kazerouni’s earlier solo EPs, and yes, there is something lost in adding more minds to the meld. Warm Nothing blends together more seamlessly than Kazerouni’s earlier efforts, which often whitewashes over the small windows in each song. But beneath the spackle, these Pacific Coast boys have two shots more fight in them than your average day-tripper.

The album’s opening number, “Never Wake Up,” matches floating observations with the frustration of inactivity. It shouts WAKE UP and lulls you to sleep in the same sugared breath. “Inner City” sounds oddly like a Christmas carol, but the narrator squashes any holiday spirit, feeling trapped and stripped of something he remembers as better. Still, Kazerouni asks the subject of his song to “hold on,” confident that everything will change. In a falsetto so high-in-the-sky it’s almost untouchable, Kazerouni sings, “I hope you don’t die” to a stuck-in-the-mud companion in “Peru,” reaching backwards into the void to offer a hand out.

“Yeah Right” admits the inevitability of time, but also knows it will “take its time on me,” echoing the sentiments of “Happy Birthday,” as Kazerouni sings, “I’m never gonna grow old too fast.” Rooted in reality but cloaked as illusions, these songs cement the fact that there can’t be a “too fast” for time – it stays steady regardless of our anxieties and hopes.

Capped off by the delicate “Deep Down,” both a back-together ballad and an anthem for anyone trying to escape their own hang-ups, Warm Nothing holds both lock and key to getting free. A bit more than your average soundtrack to a snooze, So Many Wizards offer the kind of meditative, fuck-this mantras that can really send a mind somewhere else.