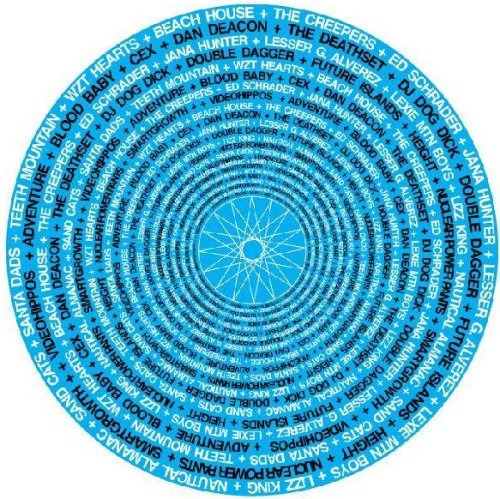 Twenty-nine bands and seven cities for the Round Robin tour.

As if Baltimore could get any weirder, here's a Deacon-headed live show consisting of 29 bands over two nights, all playing around the perimeter of a round room, one song each, and you just caught in the middle of it all. And the tour is going on the road, making the world just a little more Baltimore, one city at a time. Featuring Dan Deacon, Beach House, The Deathset, Jana Hunter, Adventure, Lesser Gonzalez Alvarez, WZT Hearts, Nautical Almanac, Video Hippos, etc.

The format of the show is as follows:

—All the bands set up at the same time along the perimeter of the room with the audience in the center
—Each band does one song per round, no breaks, back to back to back etc., until the show is completed
—There is no headliner or opener, no front row or back of the room

The 60+ people driving around by only veggie powered vehicles in a community on wheels. Curated by Dan Deacon, the tour includes bands from Floristree, Wham City, Tarantula Hill, The Bank, Comfort Dome and other Baltimore music homes.

WHAT IS EYES NIGHT? FEET NIGHT?

The tour is divided into two nights. The first night (Eyes Night) is a mixture of folk, noise, theatrics, improvisation, music that is spiritual, dreamy etc. The second night (Feet Night) is devoted to music that you dance, thrash or otherwise move around to and is a mixture of electronic, punk, hardcore, dance, and rock and roll musics

also there will be bands from this group, dubbed the “Weird Round” peppered into the line-up for both nights: