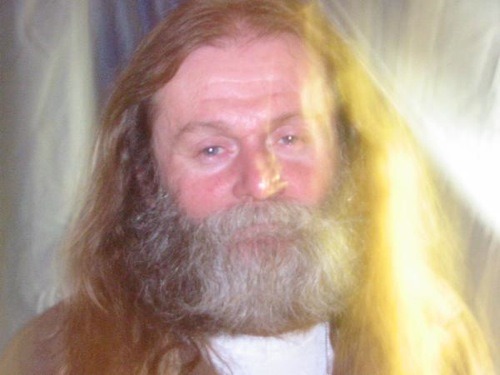 [Clutchy Hopkins will take your dollar, but he's not gonna lie: it's just for more crack.]

I'm always a fan of obtuse persona-driven music probably written by someone harboring conflicts of interest in the so-called “industry” (Starbucks tip-wages are doing better), and Clutchy Hopkins is a great one. It could also be some big-name producer looking for a new angle, but you know, that's not as fun. “His” new album, Music Is My Medicine, an ostensible collaboration between himself and one Lord Kenjamin, is a satisfying mash up of trip-hop textures with island dub (not to be confused with dubstep). The whole story, off Ubiquity's website:

Late last year Ubiquity was approached by the mysterious Misled Children about another project from Clutchy Hopkins, the man they claim to represent. A vintage Caribbean tracksuit jacket was found in the office fridge, and written in permanent marker on the inside right arm was a request for a meeting where we would “get another piece of the puzzle.” Despite the goose chase involved in putting out the last album we could not pass up the opportunity to hear some more Clutchy Hopkins music. We agreed to meet the Misled Children in Joshua Tree, CA. Sweating from the 110 degree heat and skeptical about the possibility of a no-show we went to the Joshua Tree Tavern for a cool beer. The bar tender spotted us as we walked in. When we ordered a couple of drinks he looked us straight in the eye and whispered, “Follow me.”

Taking us to a messy back room, filled with empty glass bottles, a collection of stuffed owls, and strewn with old newspapers, he handed over a plastic bag and said, “I think this is what you came for.” Despite the lack of liquid refreshment we decided to leave quickly, the local eyes were glued on us and we were itching to get at the contents of the bag which by now we knew had to have been planted by the Misled Children. Inside was a short stack off Apex 2-inch reel-to-reel tapes and a small journal. The journal contained stories of Clutchy Hopkins, and his move to Barbados. The dates of the stories were vague but seemed to span the late 1970s through the early 1980's. Hopkins had moved there in search for a medicine man, who also hand-made percussion instruments, named Lord Kenjamin. Over the years Hopkins had heard stories about this simple man and as the notes read “his mission to help people come to a place of peace and humbleness through music.” Hopkins searched for several weeks, tricked on several occasions into dead ends by the local children. At times it seemed that the village people wanted nothing to do with Hopkins, “The children enjoy confusing me with directions that lead me back to where I started. It is like a daily joke,” he wrote, “One day they tell me to head east, the next day west, and all with a suspicious smile.”

Hopkins was about to give up his search and go home when he was bitten by a poisonous Lionfish. He passed out from the pain while in a side street on his way back to his hotel room. He was dehydrated and in bad shape after laying there for nearly 2 whole days. A group of the local children found him close to death when their soccer ball bounced down the street and rolled into his listless body. Feeling guilty that they had misled him on his quest, the children carried Hopkins on a stretcher made of sugar cane to Lord Kenjamin. For the next 3 months Hopkins was in and out of consciousness. At this point in the journal the notes in the book have been ripped-out, we don’t know why. But the next page that is legible reads “With faint memories of a 4 track, deep-rooted beats, and a melodica, I have been brought back to health by the help of Lord Kenjamin and the music we made together.

As a token of my appreciation I have promised the good Lord Kenjamin that the world would one day hear these recordings. The music has made a huge impact on our spirits and health during this time. We will call this record Music Is My Medicine.”

The album leaked today. Buy it at Ubiquity.

Did we mention that they made two obfuscating web sites (abundantly supplied with google ads to click through to your heart's content):

Who is he really? Don't know. We're not inside this story. One of the above websites offers up: