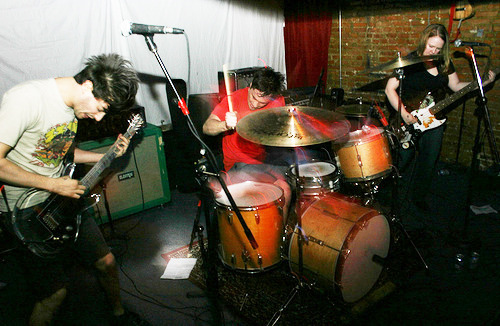 Pygmy Shrews (Sorex hoyi) are the smallest of mammals, but noted for their ferocity and vigor. Pygmy Shrews, similarly, may blast through a song in only a minute or two and a single chorus, but, likewise with notable aggressive frenzy.

Hardcore, long more the jurisdiction of growing up in Long Island (or my own small town Maine for that matter), seems to be undergoing a minor Brooklyn revival at the moment. Minor, but loud and desperate, and with a distinctly New York zeal for experimentation. Combining the vicious, pounding vitriol of Drunkdriver (via shared drummer Jeremy Villalobos) with the harsh, precision dissonance of Zs (via shared guitarist Ben Greenberg) with the lashing, frantic bass chops of Tia Vincent, Pygmy Shrews produce brief, violent outbursts that balance out their pitch-black fury and atonality-flirting sludge with sudden, focused leaps of anthemic melody. It's almost like a glimpse of an alternate history where early grunge managed to keep its fist-pumping universality, but dodged celebrity and nu metal back into the underground and further innovation.

The band rises out of the ashes of Cutter (itself a reformed version of the Fugue), with that band's instrumental core seemingly suddenly realizing they no longer have any need for outside vocals (previously Joe Somer, then Kevin Barry), Greenberg and Vincent stepping easily in to fill that role. What's amazing is how much this seems to have tightened the band — now darting from tumultuous metal flurries to syncopated slow grind to surprising passionately swelling guitar — and how good of a vocalist Vincent turns out to be, sliding directly from strident punk shout into clear, strong melodies that pierce the guitar muck.

Just listen, it's all here in just two minutes:

The brilliant touch, here in the luminous chorus harmonies of the final moments, or in the harrowing throb of the mid-section of “Catheter”, is that the huge shout-along melody — the sure chorus in any other band's hands — comes only once and is gone, just one part of overwhelming momentum driving each song to its end. And so these are hits deprived of pop structure and the tedium that it entails. These songs will not fade into familiarity or wear out.

How did such a new band reach this sort of effortless assurance of vision and purpose? Well, Greenberg's been playing with Vincent since age 14, so it's actually taken years to get here. But now, he explains:

In so many ways this is the culmination of all the various aesthetic threads we've been refining for years. I hope we're a band forever… It's so gratifying to finally find myself in a situation where we're all shooting for the same mark, and that eliminates most – often all – questions. Things feel very efficient but also organic. It really feels like every thing we're doing is exactly what we need to be doing.

Get ready: debut album The Egyptian will be out this summer on Wantage USA, also home to the likes of Japanther, Big Business, and the Oxes (RIP), while the (killer) Big Time cassette is available now through their Myspace. And they'll be playing tomorrow at the Cakeshop, with a nice selection of those devastating new hardcore outfits I was mentioning.

They also have a weird blog, for all the cryptic communications the band sees fit to impart.