Copywrite's Got Beatdowns by the Pound 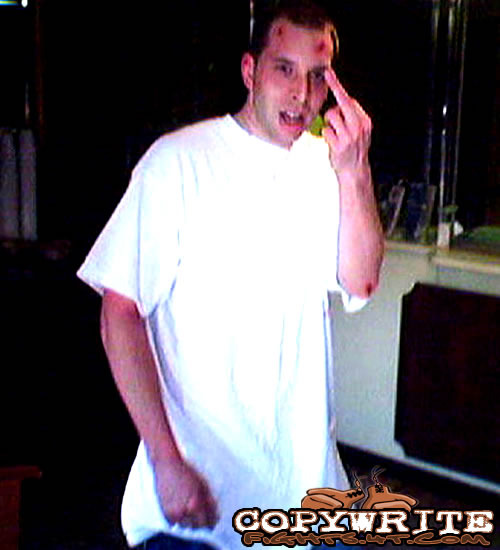 When keeping it real goes to the head of a white rapper from Ohio who's still gassed up from 2002 hype.

If you don't know, now you know. Member of the defunct Mhz Crew of Columbus Ohio (a collective that included Rjd2) and former Eastern Conference Records recording artist Copywrite has had a rough career since backpack-punchline-internet-rap became an obsolete genre. It seems the only time he's in the internet news its regarding a beatdown.

This is not a departure from the usual Copywrite news.
According to Rhymesayers recording artist Mac Lethal's message board, Copywrite caught another bad one in Kansas City. Mac Lethal reports:
“He was to perform last night at the _______ Bar , with my People CES CRU, and was basically a DISRESPECTFUL ASS, dissing the DJ, wasn't gonna go on stage AFTER he was pre-paid, so everything was kept calm in the bar but after he left the bar……………..Kansas City beat him down in the parking lot and sent him running trying to flag down any car he could so he could escape.

I DO NOT dig on people getting violent EVER.

But don't come to KC effing around like you run the place, which is basically what him and Vast Air were doing, anyway, they most likely wont be back.

Prior to this incident Copywrite has not bothered much with being an emcee with albums, his only official record to date is The High Exhaulted, but seems to ritually catch a bad one every six months like he's trying to get on bum fights.

The last time I attended Scribble Jam, I remember a huge fuss outside of Top Cats as night approached. The word spread fast that Icon The Mic King had dropped Copywrite with one blow outside the venue.

I remember seeing Copywrite at the front doors preceding to the altercation. He mean-mugged his way through the entrance to check-in his merchandise. I was talking with Chicago producer Maker and cracked a joke about Copywrite's pissy disposition. Weeks earlier the internet was LOLing over Camu Tao (R.I.P.) beating Copywrite with his own brass knuckles.

Apparently Copywrite also had a run-in with some snowboarders in Colorado, but no official news of this exists. The internet loses this week due to a lack of photographic or video proof of Copywrite begging for a ride at the Sonic across the street from the venue.

You can get all your Copywrite Punch Out news here.