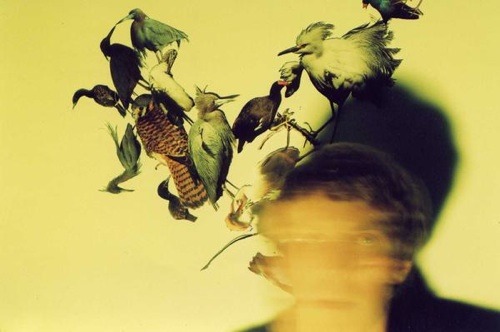 Axolotl (ash-ill-lote-ill) is a kind of salamander from Mexico. It's also Karl Bauer's moniker for a one-man noise machine since 2002.

While the means to making his crunchy, tautly layered experiments for Axolotl are constantly evolving, today Karl Bauer achieves his ends with a viola, an “early nineties children's electronic drum kit,” a vocoder, a Moog (when he's able to drag it around), “percussion, gongs” and too many effects pedals to list, according to him.

The results are a confrontation between decimated signals that, sent through his tangle of effects, trade their melodic roots for austere layers of distortion, and a stubborn inclusion of clean, supple melodies, as often represented by a Moog as by his own vocals.

He's on the eve of a European tour with Animal Collective, a group whose members he's been friends with “for years,” while he just finished off a slot on the Approximately Infinite Universe where he traversed the UK, collaborating each night with Finnish and U.S. noise racketeers. Past collaborators have also included Inca Ore and, currently, Mouthus.

When he comes back to the states, he'll relocate to Brooklyn from his parent's house in Jersey City, where he's been camping out between his constant touring. (On Axolotl? “Mom is proud.”)

Mr. Bauer's been kind enough to send us along an early mix of a song that “will appear on my forthcoming as of yet untitled Catsup Plate LP” called “Saturn Conjunct”. It's noticeably cleaner and more fixated on undulating rhythmic interplay than the tracks on his Myspace, more at home with Animal Collective's onstage experiments or the loop-based canopies of harmonies constructed by White Rainbow.