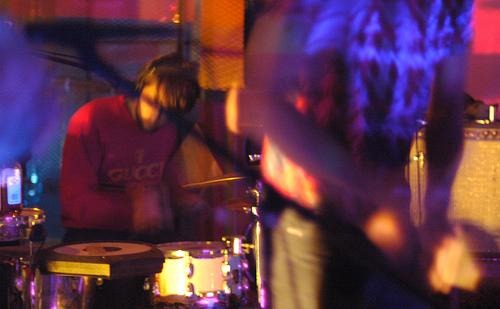 Mahjongg are a Chicago-based band that's got enough polyrhythms and unconventional synth-based instrumentation and kooky arrangements to be lumped in with other white dudes like David Byrne and David Longstreth and Fela Kuti.

They extended their tour to 21 dates, moving east to west over January, February and March.

If their bio is to believed (and band bios are always to be believed), Mahjongg are not just another group of white dudes touting a nifty new avenue into “world” music that's cool; they're the bearers of a new techno religion befitting of Necromancer and/or John Travolta:

This ever-expanding Sect uses “irratainment” to teach the warnings and Revelations of the almighty god Kontpab. Kontpab basically warns the human race of the mass “funneling” of the populace minds into The Grid.

Once trapped in The Grid themselves, Kontpab instructed Mahjongg to make a pilgrimage to Chicago, IL., where they would form their first “warning orbs,” at local art spaces and bars, and in turn be shown the light that is The Sphere.

Kontpab is out February 12 on K Records.