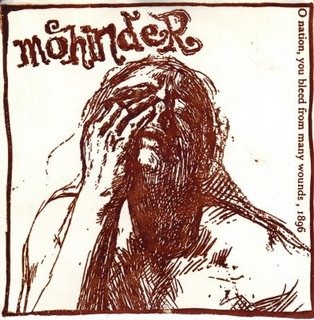 Pukekos are New Zealand marshbirds known for the raucous noisiness of their defense against predators, with whole neighborhoods of the birds “shrieking and carrying on” late into the night. Pukekos.org is a blog (or perhaps more accurately a sort of combined library and magazine) devoted to the documentation, exhumation, and exaltation of four decades of DIY music, of a huge selection of bands known, often, for the raucous nosiness of their sets, crashing and shrieking and yelping late into the night. As well as most anything else imaginable, each post offering a complete or partial vinyl discography of a notable band, new or old, forgotten or remembered. The site is notable for its obsessive completeness: the site's own pristine 320kbps vinyl rips (plus the occasional cassette, CDR, or soundboard recording of a live set), with high-res scans of all available packaging and accompanying material: sleeves, inserts, fliers, brochures. An invaluable resource, especially seeing as some of these bands have left little or no internet footprint. And with daily updates, we're already almost 400 posts deep. I hope you've got a spare hard drive.

The site is the project of BJ Rubin, currently a Daily Show producer and often most visible (audible) when belting out jazz standards to Kevin Shea's drums in their band Puttin' on the Ritz. Rubin is also in the process of starting a label, Dick Move, whose first release will be the debut Knyfe Hyts 12″, Screming Lov b/w We Go Wanderin' out on April 20th (the 100 copies of the record will be for sale at the release show at Monster Island, and the tracks will be available on Pukekos for 100 hours from that date). Most relevant here, he seems to have been everywhere and met everyone: Pukekos is filled with fascinating personal reminiscence and context, and where he lacks stories of his own he frequently solicits the help of the bands themselves.

Today's post concerns Mohinder, a Cupertino, CA hardcore band that put out a 7″, a split, and an LP (all included here, plus live material) in their two short years of existence, helped define the screamo movement, and influenced Rubin's own first band, the Angel Assassins.

Some other notable entries from the first quarter of 2009:

-Early Black Dice! Some of it from when they were still an actual hardcore band!
-The complete singles of 90s British indie-pop group Heavenly.
-Three singles from rapid-rising lo-fi garage rock duo Wavves.
-Fantastic early post-punk from Fashion.
-All the out-of-print These Are Powers stuff you didn't know existed.
-Every sugary, perfect single from 90s brit-pop quartet Kenickie.
-Tripped-out noise-pop from Zola Jesus.
-Collected White Stripes 7″s.
–So much more.

Coming soon: A discography of all the old Blank Dogs material that was out-of-print before you'd heard of them, each release accompanied by a custom recipe.