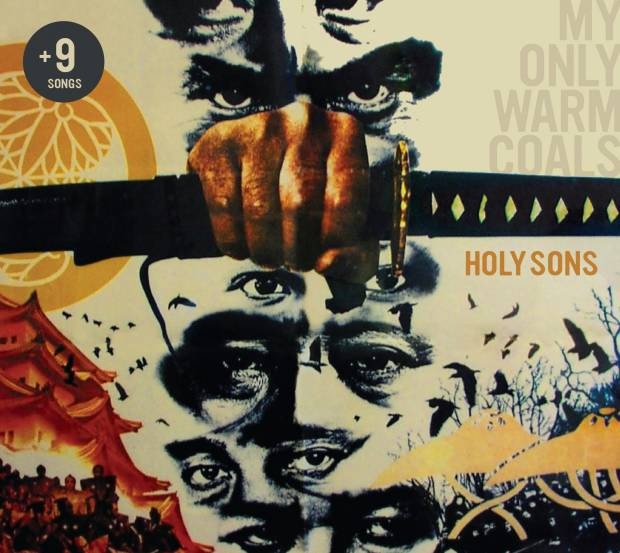 Staying true to his ascetic roots, Emil Amos of Grails, Om, Lilacs & Champagne, and so on, premieres “The Fact Facer” from his solo-project Holy Sons. The album My Only Warm Coals was originally released on the Dutch imprint Morc Records some years back on a 10″ lathe cut polycarbonate vinyl in a small circulation of only 200 copies, and thanks to the Important Records' repressing we get 9 more tracks on top of the original 10 songs. Now you can revisit Amos's version of late night 1950s samurai cinema, doubling time on a vision quest that where the singer-songwriter and enlightened warrior work as one spirited being.

With the steady bass electric lead and trailing “oooohhh” vocals, Emil directs his own historical epic in the form of a song. Placing himself as the legendary swordsman Takezo, Amos explained to us how “The Fact Facer” was born:

“The Fact Facer” was recorded about 10 years ago to the day. I was in the midst of a late-night ritualistic obsession with Toshirō Mifune & often passed out with images of him flickering off the screen and into my brain waves. The 'wandering samurai who can't be tamed' became a central metaphor for me and I ended up cutting this particular song as a tribute to the breed. The sample is from when a monk suspends Mifune in a tree to get him to face his own nature & advance to the next level of self-awareness or something to that degree in “Samurai 1 : Miyamoto Musashi”.

And like those late-night images of Toshirō Mifune flickering in Emil's eyes, samples lifted with love from Samurai 1: Miyamoto Musash play throughout the background in different levels of varying pitch. “I'm doubling time, spilling my glass, like so many safe ways I'm travelling past, I don't need to rest”. Amos takes on the Musashi Miyamoto character of a restless samurai figure making passage through the badlands, strange-lands, in the hopes of peaceful passages. This brings Hiroshi Inagaki's Samurai Trilogy to the modern days of freeways, genre shifts, and new generations where a man's nature is tested with new challenges. As a conscious singer-songwriter of warrior-like patience, zen, and zeal; Amos becomes his own self-described/self-styled, “wandering samurai who can't be tamed”.

On this journey we find that all highways and roadways lead the tireless adventurer down the way of the katana. “I've been with the worst, I've seen it before, like Toshiro Mifune, I'm always with sword, I can't stand to sleep”, sung in self-overdubbed rounds smoked in sativa, “smoking dope or whatever I do, the police won't find me if I stay with you… they will”. With a dab of paranoia and self-conscious behavior working on overtime, self-effacing and fact facing become the lyrical roads of humility. “Humiliation on the middle of the highway, humiliation is kind of my thing, I'm on various drugs, I need crowd control, I wouldn't know if I had sold my soul, so many years ago…” With a somber spirit, Amos replays the sped up audio tape of Mifune suspended in the tree by the monk, while departing from his own Himeji Castle on a search for enlightenment.

Holy Sons' album My Only Warm Coals is available now from Important Records.