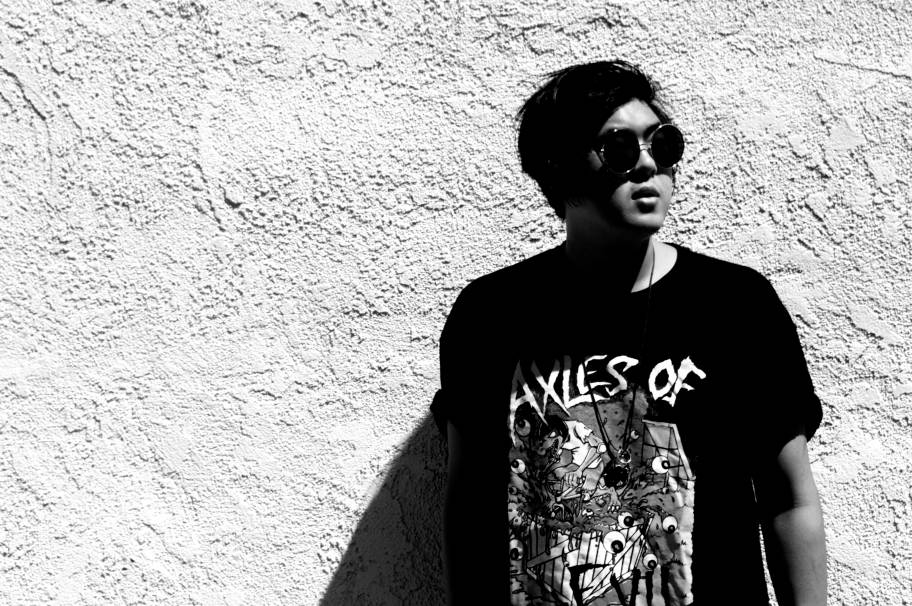 GRMLN is the consonant-only moniker of Yoodoo Park’s sometimes solo/sometimes with band musical vehicle that has become one of the Pacific’s own natural independent forces. With the anticipated album Soon Away being released September 16 on Carpark Records, we are proud to premiere the full album stream of an album that was lived, written, and recorded between San Francisco and Southern California. From the college days of dream song drafts of the solo artist on Explore and the subsequent California garage pop of Empire, Soon Away brings the near and far feelings closer in proximity with the most immediate cycle of songs to date from GRMLN.

On “Jaded”, Yoodoo dispels the ‘over it’ mentality with the chorus invitation to “be the one you want.” With the guitars, amps, and rhythm tempo turned way up; the policy of lyrical honesty remains in the confrontation-confidential rocker, “Avoider”. Keeping the pace up, Park runs through the cigarette lit allusion toward nighttime proclivities on “White Lung//Black Lung”, before switching up the percussion with the high decibel guitars of the Cali break-up pop on “Numb” with the, “if you love somebody else” surrender. Everything lyrically remains close to the heart and soul, while the momentum of Soon Away shows no sign of slowing on the audio tape journal, “Crawling Into You”, and next with the ultra-bright romanticism on “Awake”.

On the “tell me you’re all right” inquiries of health, happiness and well being on “Of Nothing”, Yoodoo kicks off one of the biggest GRMLN power-pop parties yet, before speeding down the 101 freeway of “Yamero”. The album prepares for a landing descent while keeping the energy earnest and enduring on the “let me go” pleading “Faux”, as Park touches down on the runway with the parting title-track that kisses the tarmac while burning out the Marshall vacuum tube bulbs and turning out the lights of the biggest GRMLN album to date. Yoodoo Park joins up with us again for a closer look at the west coast heart of Soon Away, following this exclusive album stream:

From the opener “Jaded”, and into the emotive arc of “Avoider”, and the beaming “White Lung // Black Lung”, et tal, takes those ultra spirited pop garage hooks from Empire and marries them with the seashell lenses found on the dorm room west coast dream journals of Explore. From embracing Krishna teachings, writing songs in Japan, on tour, recording with the always awesome Patrick Brown and Sean Paulson; what has the experience of making Soon Away been like through all these developments, shifts, evolutions, and more?

Writing for this album felt like the same way for every album I have made so far up to this point. I never put boundaries that might prevent me from writing a certain kind of song if I am trying to convey something or write about something. While writing these songs over the past few months, the experience was definitely a trip to get this album done and out.

“Numb” is one of your largest, and loudest tracks that could fill an amphitheater with a Santa Cruz -Pacific Street heart, to your more So Cal steeped inspirations on, “Crawling Into You”. It’s sort of like you connect all the disparate ends of the California garage traditions, that came through this process of half a decade’s worth of home, garage, backyard, campus recordings you have taken these far and away Cali pop sensibilities through a really personal, ‘Soon’ and immediate approach. You could also say that “Awake” has some Northwest vibes too, what is it about the west coast that you feel continues to impact your own relationship with music compositions?

I guess it came down to having more fun at shows and playing louder music that drove most of the songs on this album sonically. But I definitely do feel like living in the west coast, and recently moving back and forth between San Francisco and Southern California has definitely molded my inspiration from the bands around me that I would see from shows and vibe off of.

From back in the days of Explore, you have always been such a big proponent of the acoustic side of songwriting, featuring those video exclusives of recording in forests, to subterranean drainage pipes, providing stripped down revisions of your music, old, new, covers, etc. When you hear the mighty anthem arrangements of the completely plugged and amped in “Yamero”, “Faux” to the big firework ready title track finale; how have these rudimentary acoustic minded sketches impacted the significantly more elaborately arranged pieces of you created on Soon Away?

I personally love writing acoustic songs because of the accessibility but also because when songs are stripped down to the core of the melody and the lyrics, shit gets real. So I wrote most of the song’s melody and lyrics with an acoustic to give it a foundation to work off of the original base.

The title of the album struck me too on your many experiences of travels, tours, tuition, learnings, to your proverbial “burning out the lights” with the bright stage lit presentation, performance of this full-length. How do you feel these these collected adventures have all come to a head here on this ambitious release?

This album to me is a section of my life that I personally experienced and wrote down in a form of songs. This was just another step in my musical endeavors as a person who writes as a hobby.

What other items do you have cooking on any possible back-burners, side-projects, etc?

Any artists you have been tight with or have been listening to religiously as of recent?

I LOVE my friends band Same Difference, they’re based in Costa Mesa and we brought them on our last west coast tour, but they’re hands down the best post hardcore band in my opinion.

Parting words of wisdom, preface items, or accompanying preludes for the advent of Soon Away?

I guess life isn’t as bad as you think, so go hard.

Soon Away will be available September 16 from Carpark Records.