Saturday Looks Good To Me announce new album and tour 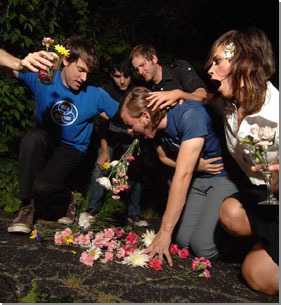 Saturday Looks Good To Me have completed their new album Fill Up the Room and are set to tour, well…now. The new record is out September 11, 2007 on K Records. This is the fourth full-lenghth from SLGTM and is preceded by 2004's Every Night on Polyvinyl and their singles and rarities collection Sound on Sound, released on Redder Records last year.

Fill Up The Room (a.k.a. Love and Death) while still pure pop at the core, represents an effort to move away from the “60's girl group” and explore expansion in sound and lyrical experimentation. The songs integrate lingering jams with samples and drum cricle breaks, juxtaposed with epic and strident choruses that spontaneously erupt. The subject matter has also seen a maturation; stepping away from broken-hearted woes to investigate themes of science and spirituality.

The band is heading to SxSw and playing shows to and fro. Their European tour is currently being scheduled for April and May with specific dates TBA. This coincides with the band's release of a tour-only one-sided LP of exclusive new material called Green Mansions.