A chat with Don Fleming 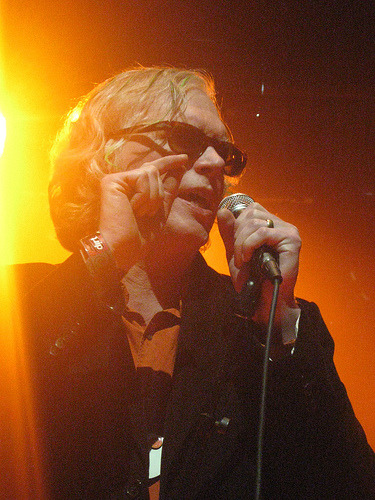 Don Fleming is responsible for producing many of your favorite records by Sonic Youth, Andrew W.K., Hole, the Posies along with being a member of Half Japanese, Foot, Gravy, the Backbeat Band, Gumball and a solo artist in his own right. His first band Velvet Monkeys just enjoyed their debut album Everything is Right re-released on Instant Mayhem/Thick Syrup Records along with the release of a new solo record entitled Don Fleming 4 also on Instant Mayhem. Don took a break from film screening in Bologna, Italy to talk about the new record, old records and future records.

Neat hearing the re-release of your old band Velvet Monkeys' Everything is Right album. I like the different quality of sound styles that jump from studio to live recording. Where was the album recorded?

It was recorded at the original Inner Ear Studio in Arlington, VA. That's the place that all the Discord bands like Minor Threat recorded as well as many other indie D.C. Bands made their records. The studio, owned by Don Zientara, is still very active.

Are you still as much of a Velvet Underground fan now as you were then in '82 with the Monkeys?

Sure, they still rock. Somewhat oddly one of my big influences at the time was Phillip Glass, I really was trying to be minimal, repetitive and chant like with those songs.

Will we see a tour of you and the Velvet Monkeys ever again?

I think we'll do a show or two at some point if we get a cool enough offer, but touring isn't high on the priority list.

Dig the grunge sound on “My Little Lamb” on Don Fleming 4. How was it working with R. Stevie Moore?

Working with RSM has really been fun, I'm a big fan of his songwriting so it was neat to collaborate on a tune with him.

You even provide guitar work that is reminiscent of 90s Sonic Youth on “Torn by the Hands” (featuring Kim Gordon).

Well it's Kim on guitar and she wrote the piece, so that explains the SY vibe. I added bass and vocals.

How has your work from the 90s, collaborative and solo, informed your current sounds?

The songs with RSM, Kim Gordon and Julie Cafritz were really based on their sound more that mine, and the last one, Remember Adam's Fall, is all me, so I guess that's the one that sounds the most like my earlier solo stuff.

What's your favorite Sonic Youth record that you didn't produce?

Sister. The energy of that one is very distinct.

What was the secret to making Teenage Fanclub from Belshill, Scotland sound like the perfect power-pop of Big Star from Memphis, TN?

I was shooting for Badfinger, their album Straight Up is one of my all time favs. But we did a cover of Free Again and people made that connection.

Could power-pop make a comeback in 2011 like it did with Bandwagonesque in 1991?

Sure, if someone writes great songs it could happen.

What other collaborations do you have up your sleeve?

Right now I'm working on a tune with Sharon Cheslow from Chalk Circle.

Who would you like to work with in the future?

I always wanted to work with Todd Rundgren because he was the main reason that I got interested in producing.