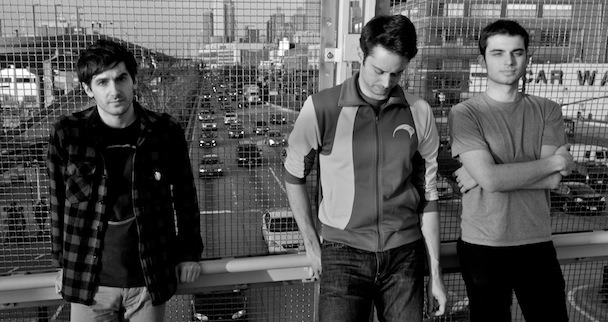 Mr. Dream is a three-piece hailing from Brooklyn that caught my ear close to a year ago when they released their first single “Scarred For Life”, a brain thudding, riff-driven outcry that quickly brought to mind acts like Wire or even the Pixies. While they’re equally as indebted to music of the 80s as many of their neighbors, they chose distorted guitars over synths and software programs. With a standout debut album entitled Trash Hit on the shelf, Mr. Dream has established themselves as a no frills, post-punk-indebted, chillwave-avoiding force that may have come at a time when they’re actually most needed.

It’s pretty safe to say that you guys are music lovers all around. Starting out as music writers before taking the jump into performing, has one art form taken precedence over the other?

Adam Moerder: I’ve hung up my critic hat. Now it’s all Mr. Dream, all the time.

Nick Sylvester: That said, it’s time for us to come clean: Mr. Dream is not a band. It’s an immersive ‘stunt’ journalism project to get the inside scoop on what it’s really like to be a band in Brooklyn. Since 2008, we’ve been rehearsing in a practice space, writing rock songs, and even playing rock concerts in an effort to learn the ins and outs of the scene. After we dissolve the band in 2013 over creative differences (Matt’s drug problem, but don’t worry, he will overcome and eventually open up his own restaurant), Adam and I will shop around our manuscript, Our Band Was Our Life–Or Was It? It’ll be picked up in a “nice deal” by Random Little Brownhead, the last remaining publisher of words on paper. After that, with any luck, an excerpt of the book will run on the reviews portal of the Pitchfork Music Festival website.

Matt Morello: These guys just taught me how to form letters and numbers last year, so I’m actually thinking about trying some criticism for the first time.

How long have you all been playing music for?

Adam: I’ve been playing guitar for about a dozen years. For a while I played trombone in jazz bands at school, but quit by high school to play guitar in rock bands.

Nick: I was serious about jazz trumpet until a botched wisdom teeth removal, which permanently damaged my embouchure. That was 2000. In college I got more into men’s singing and electronic music, which at the time was known as electronica. My dad played drums professionally so they’d always been around the house, but I didn’t take up the instrument seriously until Mr. Dream.

Matt: I grew up playing piano and eventually started singing more and playing guitar. Like Nick, I didn’t play my Mr. Dream instrument seriously until Mr. Dream. During Nick’s bathroom breaks, I am also improving as a drummer.

Trash Hit has its noticeable influences, which stylistically, are a clear sidestep from the type of music that’s being most fashioned in underground music today. Was this an outward effort to offer something different/refreshing, or more of matter of just what you happened to be digging on?

Nick: We weren’t trying to make a point or anything, but I agree it’s a clear sidestep. There is a very specific kind of aggressive but melodic rock music all three of us like, but for whatever reason not many bands have been making it lately. That’s the stuff we’re trying to connect to. Big Black, Rapeman, Wire, Pixies, Halo of Flies, Buzzcocks, Breeders, GBV, early Siouxsie, Brainiac, Naked Raygun, the Dicks, Big Boys–

Adam: The fancy pants answer I’d love to give here would be that we’re doing some Expressionistic send-up of classic rock, and that the song “Trash Hit” is actually a mutation of “Radar Love,” blah blah blah. It’s way simpler than that, though. We just want to make music that has tension between the ugly and the pretty, the clever and the dumb, the funny and the unsettling.

Matt: Put another way, it doesn’t hurt your motivation when what you’re digging on also seems to be a clear sidestep from a lot of what else is happening.

As opposed to the common misinterpretations of Trash Hit being an “angry” or even a “violently enthused” offering, I find it to be more of a cathartic effort with its momentary angst. Most importantly, it just sounds like you’re having a shit ton of fun – i.e. on “Learn The Language” where a chuckle is even thrown out. Was the recording process a fairly easygoing one?

Nick: We didn’t feel like we were on the clock or wasting anyone’s time. That’s the benefit of recording yourself. The downsides are that you are recording yourself, using dubious equipment you bought off the internet, and you don’t really know what the hell you’re doing anyway.

Where was Trash Hit recorded?

Nick: Trash Hit was recorded entirely in Sound City, which is where we rehearse. We began tracking in the summer, and did about four or five songs at a time over the course of a weekend. It was kinda complicated. We had to get in early otherwise it was way too hot, or the metal bands in the practice rooms near ours would create bleed and ruin the takes. At the same time, we didn’t want to get there too early, because of this guy we call “the producer”. He got into Sound City really early every day to hash out these Death Cab piano type songs he writes. You can kinda hear one at the end of “Crime”. The producer ruined countless vocal takes for us.

Matt: Past the various challenges, though, it’s important to remember that Sound City is also near some of the finest coffee and sandwiches in Brooklyn, without which possibly none of this would have been possible. We are still praying the mixed lamb and chicken pita at Döner survives the current renovation.

In Matthew Perpetua's review of Trash Hit for Pitchfork, he cleverly said that as a music writer, you can occasionally “nudge the world toward what you want. But sometimes that nudging just isn't good enough, and you have to take matters into your own hands and actually make the music that you want to hear.” Would you say that is accurate, at least in Mr. Dream’s case?

Nick: Matthew is dead-on. The strongest form of music criticism is new music itself.

Adam: I had reached a point where I felt my talents were better suited to making music than writing about it. I had trouble keeping my finger on the pulse of everything. Then, when I’d manage to, I struggled to understand a lot of stuff that was becoming popular, so I figured it was time to shift gears.

You recently had the pleasure of offering backing vocals for LCD Soundsystem’s final show at MSG. How bizarre/surreal/thrilling was that experience?

Nick: It was an honor. James’s music has meant a lot to us over the years.

Matt: A lot of the best stuff for me was actually in the practices and shows leading up to MSG, where things were coming together but maybe not quite there yet. It felt like a bunch of talented friends (and friends of friends) who’d been brought together for this elaborate labor of love–really focused work that was also really fun and exciting. I don’t mean to sound sappy and utopian about it, but it was eye opening.

Adam: It was an amazing, humbling experience. I’m glad all those musicals I did in high school are starting to pay off.

Being New Yorkers, what are your thoughts on its current music scene? Is there anything new that has particularly peaked your interest?

Nick: There are a bunch of amazing bands in Brooklyn, but they fly under the radar because they’re not part of the whole lo-fi chillwave bedwetter music scene that internet critics seem to care about. Sleepies, Talk Normal, Yvette, Fort Lean, Ava Luna, Midnight Magic, Sweet Bulbs, Sediment Club, Signal Break, The Men. All awesome bands. Black Dice remain amazing. We obviously love Sleigh Bells. I’d ride for Obits, and anybody on DFA, especially Gavin Russom’s stuff and Shit Robot. All these guys are doing totally awesome, wacky stuff.

Adam: I cosign all that. I also haven’t been able to shut up about Twin Shadow. He really transcended the many dump trucks of “nostalgic” 80s slush that are out there. The music video for “Slow,” directed by Alex Markman, was my favorite of 2010.

Matt: I really wanted to get to “Wozzeck” at the Met this week, but it looks like that’s not going to happen, unfortunately. The consolation is always that you can’t worry about missing things or you’ll go crazy, especially here. But this also means that I don’t end up seeing many shows besides the ones we play.

What are your plans for the upcoming year?

Nick: We go on a short tour with Sleigh Bells and CSS in the beginning of May. That’s the Northeast, with some scattered headline dates in like Rhode Island and Pittsburgh. I have been also been recording more bands. The Sleepies 7” comes out 4/19. Both sides are amazing. That band is like a weirder, grimier Buzzcocks.

Matt: And then there’s our new stuff, some of which is quite close to being ready to exist for more than three people, and we’re all excited about that.