What’s up Wham City? After a couple red letter years culminating in a couple epic tours (Baltimore Round Robin and the huge Dan Deacon Ensemble), you’re still throwing new acts out into the world? Don’t you sleep? Don’t you worry you might over-extend yourselves or run out of fresh talent? Don’t you worry that all this success might change you? Well, I’m happy to report that no real concerns seem warranted yet. Last Friday’s latest sampling of artists you’ve produced or gathered to yourselves revealed that Baltimore is:

01 Still weird.
02 Still attracting plenty of other independent weirdness from all over.
03 Still completely worth paying attention to.

Good work with that. Here’s a survey of what everyone else should now be paying attention to (in concert appearance order):

Mark Brown: Video artist and filmmaker, who we first encountered rigging live visuals for an OCDJ show well over a year ago. He opened with his latest, just completed piece, a selection of florid and explosive geometry and fractal abstractions set to music by Chicago’s accomplished rhythmic synth exotica outfit Chandeliers. If you’re at all familiar with the pretty cohesive look of the current Chandeliers catalog, you’d have been pleased to see how well Mark was able to incorporate it into his video.

Drew Swineburn: Synth scientist. Did the iPod-karaoke deal in a pin-stripe suit and sneakers, which sounds decidedly less promising than the (actually very promising) beats coming off that iPod. Lavishly arranged and constantly on the move, rhythmically and melodically, but coming together into simply catchy pop music nonetheless. That description sounds similar to Dan Deacon and the connections are there, though Drew’s stuff is more bubbly, less noisy. I am unsurprised to learn that he has also put together music for a VBS show about cute animals. Bottom line: producer to watch, performer to to assume will soon figure out a more exciting way to play live.

Lesser Gonzales Alvarez: Weaver of fine-crafted folk. Lesser claimed to be at about 20% health, but seemed to be at 110% warmth and charm. Maybe about 80% lackadaisical guitar finesse. I’d bump that higher, since he’s clearly an excellent guitarist, fingers loose but precise, but he also claimed to be anti-professionalism (it is the opposite of whatever is natural) and so let things get a little sloppy. Which, yes, is a part of that warmth and charm.

Ana Lola Roman: Animated and unusual synth-pop. Ana is a Brooklynite, in fact, but describes her appartment as the Brooklyn stop on an underground railroad leading bands out of Baltimore. And she seems to fit in well with that crowd, cavorting on stage with a certain charisma and lightly darting fingers for both keyboard and guitar. Backed by a drummer and some pre-aranged synth loops, Ana vaulted through her songs — banging out chords, skipping across time signature shifts, launching into spirals of arpeggio, and providing tremolo-voiced words all along.

The Creepers: Disconcerting love songs. The Creepers were one of two bands of the night featuring the vocal (and occasionally trumpet) talents of Connor Kizer (the other was Santa Dads), here paired with keyboardist Adam Endres to reassure Mr. Edwards that his daughter will be safe in their car when they take her out, and to reassure some unknown partner that she’s doing fine, it’s okay, they still like her, the first time can feel like that. What makes this all so compelling is hard to describe, but listening, I certainly found myself wanting to accept (or at least hear out) their reassurances, however dubious.

Teenage Souls: Frantic solo percussionist. Like many solo drummers, Teenage Souls plays to a backing track, and it’s typically a fittingly spastic one, with melodies cutting too and fro to facilitate plenty of unexpected lunges and turns and rolls. Some drummers go for pop songs this way, setting up verses and chorus and bridges, but with Teenage Souls, the effect can be more that of just one continuous drum solo for each song.

Shams: Knife-like dance pop about actual knives. The Knife-like quality somewhat from the sleek synthlines and beats, but most strikingly from the way he manipulated a pair of mics, one relatively normal and one with heavy voice processing, gradually adjusting the proportion of his voice reaching each to dynamically warp the sound. Any association with the spooky scandanavians was further underscored by the “I’ve got a knife with your name on it, cutting your face” lyrics. Bonus points for starting the set by saying something along the lines “a lot of dance bands start by telling the audience that it’s okay to dance. Well, I want to tell you that it’s okay to stand there awkwardly.” and then talking about the money he was making with a clip from lawsuit he was involved in.

Ed Schrader: Talk show hosts gone wild. I suppose Ed could be described as another solo percussionist, but he couldn’t be further from Teenage Souls, the single drum he stands up to hammer serving only as a spine for his yelped vocals. He himself observed that he was dressed awfully normally for weird music.

Height with Friends: Hip-hop. Long-running Bmore rapper enlists a bunch of skilled associates, fleshes out his sound with more beat variety and an expanded set of voices.

Santa Dads: Beatboxing tigers and epic beast sagas. In some ways the Dads (Connor Kizer again, here singing and beatboxing along with Josh Kelberman’s ukelele) are actually more normal-sounding than a lot of their compatriots: their songs carry clear strong melodies, uke notes bearing their voices crisply along, usually across normal verse/chorus pop structures. But their spacious compositions leave plenty of room to dwell on the strange inventiveness of the vocalized percussion, and then if you can actually see the pair, in a repurposed Hobbes halloween costume and street-found red dress, and then realize that they’re not playing songs, but segments of huge 20-minute megasongs, everything begins to feel rather more surreal. So despite their trappings of compositional normalcy, they actually end up feeling brilliantly unique, even in a bill like this one. And they are, overall, a better and more compelling band than I can really explain.

DJ Dogdick: And finally DJ Dogdick, laughing suddenly into the mic in weird syncopation and flicking an arc lamp off and on (the only illumination in the room for his set) over the electronic blurt of an old physics class style oscillator being fed into a bank of knobs and switches. Dogdick is a rapper, but unlike Height’s more polished grooves, Dogdick’s beats are crumbling home-inventions — eerie, broken, shambling — and his vocals at times processed into sludge. The atmosphere is denser and more mysterious, perhaps with a kind of menace. He ended with a poetry-reading encore.

Guy Biking on L Train Platform: And then, after the show, this guy just wanted his picture taken.

After a couple red letter years culminating in a couple epic tours (Baltimore Round Robin and the huge Dan Deacon Ensemble), you’re still throwing new acts out into the world? Don’t you sleep? Don’t you worry you might over-extend yourselves or run out of fresh talent? Don’t you worry that all this success might change you? Well, I’m happy to report that no real concerns seem warranted yet. Last Friday’s latest sampling of artists you’ve produced or gathered to yourselves revealed that Baltimore is:01 Still weird. 02 Still attracting plenty of other independent weirdness from all over. 03 Still completely worth paying attention to.Good work with that. Here’s a survey of what everyone else should now be paying attention to (in concert appearance order):Mark Brown: Video artist and filmmaker, who we first encountered rigging live visuals for... 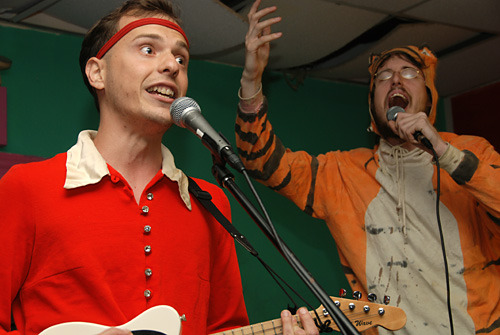