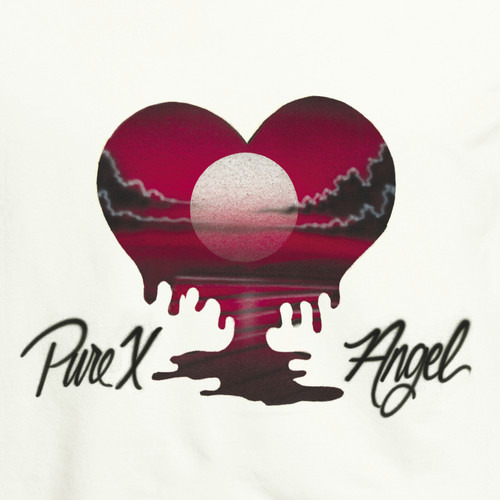 Pure X embodies the very euphoria of the substance their name evokes through their work, which often oscillates between gentle swathes of noise and woozy vocals. The band has mentioned that the appeal is the blankness, yet through their work the quartet animates a vivacious spirit of love. The Austin-based band conceptually explores opening up one's heart in their latest record, Angel, a documentation of falling madly and deeply for someone, and what that process might entail.

For their latest record, the band peels back layers of static and noise at the forefront of their previous releases, notably 2011's Pleasure. The shift renders Angel lovely in its simplicity and reminiscent of the gossamer dream pop that carried 4AD bands from the plane swoony to iconic. The record shimmers with confidence instrumentally, but yearns lyrically.

The magic of Angel, as opposed to other records plucking at the lofty highs of love, marvels in the pleasure of confronting illusions and taking them to task. “Looks like I fell into that dream again, lost and stupid,” admits a self-aware Nate Grace on “Livin' the Dream”, his voice dissipating into reverbed throbs. Lackadaisical guitars paint this record, especially on the burning opener “Starlight”, mimicking the timeless crawl of a mindless summer afternoon, where one casts woes into the heavens above.

Pure X is a band that cherishes the process of understanding in itself as a revelatory entity; on “Make You Want Me”. Grace asks: “What if I lose my mind?” over and over, a rhetorical question slowly folding into a mantra, perhaps a healing unto itself. Yet for its celestial instrumentals and spiritual incantations, Angel is a work firmly rooted in the earth. “Heaven is a feeling, one that I can believe in,” Grace confides in the listener, with a sincerity that listens like a secret revealed. The song “Heaven” is not worshiping a distant elsewhere on a pedestal, but is a palpable place, an actual space one can access if desired. “Don't matter who you are, but how you're living,” he suggests. Dispelling the transcendental is all over this record, and it's done with extreme grace.

Further listens uncover that the arc of Angel hinges on perfectly punctuated subtleties, from gentle ambience on the album's best track, “Rain”, to the detail of jazz-rooted percussion on closer “Wishin' On the Same Star”. Lyrically, Angel too champions the miniscule: “Every day hangs on the string, one and the same,” Grace muses on “Every Tomorrow”. The brilliance here gets at the heart of what is brilliant about Angel as a whole. Through hazy dream pop, Pure X are able to craft a distinct milieu of the mundane. Who knew poetry from practically nothing could blossom into something so clear, maybe even transcendental?

PrevPreviousHere and Nowhere Else – Cloud Nothings
NextSo It Goes – RATKINGNext