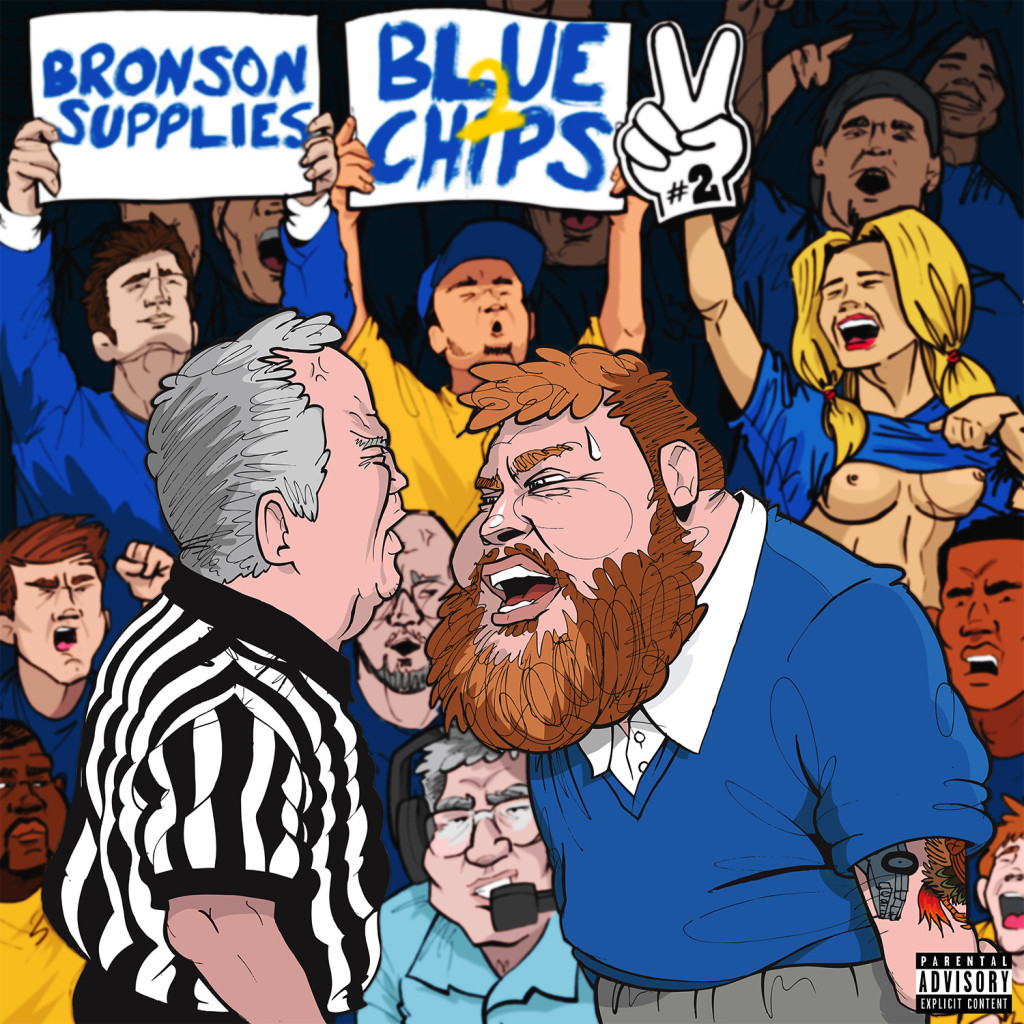 When Action Bronson teamed up with Party Supplies for the original Blue Chips mixtape in 2012, Arian Asllani (aka Action Bronson, aka Bam Bam) was generating underground buzz and struggling to shake off Ghostface Killah comparisons. He’d collaborated with Tommy Mas on Dr. Lector and Statik Selektah on Well Done and both records cast him as hardened Queens native, but the traditionalist production relegated Bronson to his borough. There’s an understanding in making Blue Chips, that were it not for the “fun factor” in Party Supplies’ production, were it not for Party Supplies’ credentials with Fool’s Gold (thus marketable to the young and trendy), Bronson was destined to be typecast as Ghostface-impersonator and worse yet, a rap traditionalist/90s revivalist.

In a year’s time he’s become Action Bronson or Bam Bam or Bronsolino with no addendums of RIYL or comparative literature. The conversation is fixated on raising questions of Bronson’s parenting techniques, marveling at the eccentricities of his taste (from hookers to hors d'oeuvres), Vice brainstorming oddball situations to film their beloved signee, and Youtube clips of Bronson leg sweeping overzealous fans who dare step on his stage. With Rare Chandeliers and SAAB Stories in his wake, Bronson circled back with Party Supplies to revisit his highest-praised release to date. Blue Chips 2 alters nothing because if it ain’t broke, then it ain’t worth improving.

While Blue Chips 2 can’t be faulted for its reanimation of the original, to some degree it surpasses the original, prior to the release there’s been suggestion that Action Bronson is stuck on auto-pilot with his writing, that the scenarios are formulaic, and the source material is recycled and stale. These criticisms were directed at his SAAB Stories EP, which I still consider a misunderstood release. But, the Action-exhaustion hits me on BC2, due to the dilemma that Bronson in the span of four records remains mostly indifferent to developing his stories into more than barbershop folklore. In the trailer to BC2 director Rik Cordero (another Queens native) casts Bronson as a mafioso who’s in the business of fixing sporting events, with Party Supplies as his sidekick that’s blowing his trust fund up his nose. The big fix? The 1995 Eastern Conference Finals Game 7 between the Indiana Pacers and the New York Knicks.

Honestly, I can’t think of a better explanation for Ewing blowing that gimme-layup other than pressure from a bearded Albanian casually waving an automatic weapon in the inner halls of Madison Square Garden. It’s such an exceptional concept that it feels wasted on having no relevance to the record beyond being an amusing promo video. This is the lingering detractor from Bronson’s mounting body of work, there’s no big picture to it. He’s bragging our ears off with lavish tales of delicacies around the world while with large and sexy demeanor rivaling Notorious B.I.G. and Big Pun combined, but for what? What if Blue Chips 2 was about fixing the Eastern Conference Finals? What if I wasn’t really pushing for a narrative to SAAB Stories, but it was just there – a song cycle built around Shawn Kemps sneakers. These would be monumental records. Instead, they exist to be heard at face value and any form of academic understanding of Bronson’s work reads as asinine. Is it so much to ask the records have some relevance to the 1994 film starring Nick Nolte, Anfernee ‘Penny’ Hardaway, and Shaquille O’Neal?

Action Bronson loves performing as a character in promos and music videos, but these mythical men, a vigilante from Grindhouse cinema named The Symbol or the Con Man who fixed the Knicks playoffs, never live in the music. They are auxiliary, after thoughts developed by inventive minds outside Bronson’s inner circle. In four records Bronson remains a critical darling and source of optimism in rap (for New York and beyond), but at some point he needs to do more than list recipes, declare “it’s me” and describe a midget’s cough.