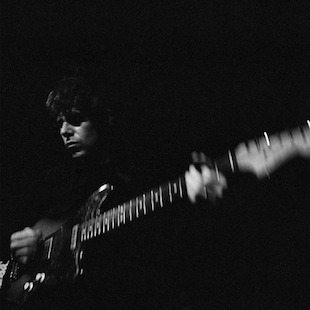 “Backwards” is a ten-second warp of a Fender-fingered dawn played in reverse, and it is the only track that truly resembles White Fence on the band's newest album, Live In San Francisco.

Yes, you will recognize the songs—the setlist spans all five of White Fence's LPs. Tim Presley is present, and his knowing squint is audible.

But a White Fence show is a bit like burning a baroque castle. Watch the flames lick up the musty jewels that adorn Presley's beguilingly simple home recordings. Tambourines, organs, loops, pitch shifts, bamboo shoots of guitar, and blasts of air and delay are all lost, consumed. Things speed up. “Swagger Vets And Double Moon” and “Chairs In The Dark,” have shaken their friendly amble and are now screaming across the countryside (Presley sings “Double MOON” like a child robbing the ice cream man at gunpoint). “Acetaminophen, my liver is dust” is pronounced not with the didactic sing-song of introspection but as a truculent declaration. “Tame” is untamed. The gardener who spent weeks gently tamping down the dirt and giggling to his flowers is now charging at you with unlaced boots and a bloody rake.

The biggest chemical change taking place here is disappearing intimacy. That the band can be right next to you, their spittle on your face, gleefully tossing their darlings into the flames—burning the evidence—is a nice trick. For those who have enjoyed Presley's home recordings as he made them, in solitude, hearing your aural talismans twisted into a bawdy spectacle can feel cheap.

Or exhilarating. And exhilarating? Luckily, the same sense of joy that streaks through White Fence's melodies and prolificacy translates well here to tape, courtesy of Castle Face's microphones. This is a live album well suited to brisk walking, mowing the lawn, air-drumming with Nick Murray's snare, or aimless drinking.

Play it loud enough and you'll check your feet for the bottle breaking midway through “Tame.” Shake your fist at “Baxter Corner's” punk rock proselytizer. Is that the most famous of Presleys singing, “She's a pretty, baaaaaaaaabbbyyyyyyyy?”

If the smoke gets too thick, ignore the white rabbits and just breathe it in.