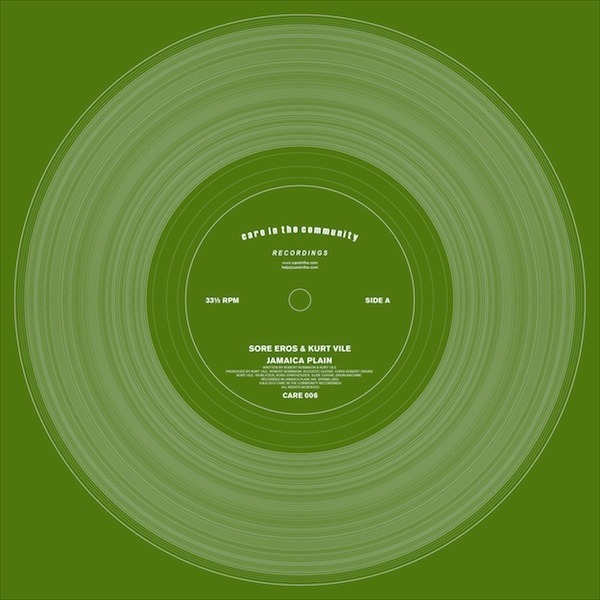 The Jamaica Plain EP is a record out of time. Recorded in 2002, it is already 11 years old upon its release. Consisting of three songs, the EP is an early document of the collaboration between Kurt Vile and Sore Eros’ Robert Robinson. To give some background, Robinson is now a former member of Vile’s backing group, the Violators. At the time of this recording he was a Violator-in-the-making.

Given the context, the time and place, it’s easy to hear things taking shape, proteins hardening to form the respective exoskeletons of both Vile’s and Sore Eros’ sounds. Still, Jamaica Plain is worthy of scrutiny on its own merit. Vile and Robinson's output in the intervening years notwithstanding, the EP is always hinting at something just beyond the edge of periphery, even in relation to itself. In its lopsided unfolding, little is said and much is implied.

In fact, the EP offers precious little in the way of lyrics at all, sandwiching a three minute Robinson­ led tune between two six minute instrumentals. The spare lyrics of “Serum” are barely intelligible, yet they are achingly heartfelt, not a through­line to the song’s two note guitar understructure, but an embellishment of it.

The Jamaica Plain EP is a record of gold-hued optimism. Despite the lack of focus, or maybe because of it, these instrumentals pack an emotional resonance sufficient to carry the endeavor. The title track takes its name from the Massachusetts town in which it was recorded. Built on a foundation of finger picked guitar and overlaid with dramatic interruptions by stretched notes and uptempo drums, the song takes shape on the basis of its own logic. It’s gradual introduction, then dismissal, of moving parts is a good metaphor for the early stages of the creative life, in which the artist learns which tools are appropriate for the task at hand. The song ends in a yawning cascade of Korg synth. It is an anticlimax, of sorts, like rays of sunshine piercing an overcast sky, hinting at a potential future, but never quite guaranteeing one.

The promise is kept, though, as the final song “Calling Out of Work,” finds the collaborators a year later. The whirring feedback that ties the track together evokes the chirping of birds welcoming a new day. Eleven years on, it's a promise on which Vile and Sore Eros are still making good.