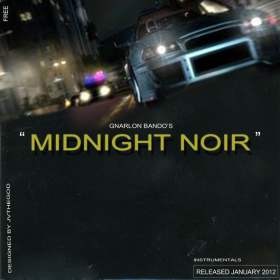 Imagine it’s a Saturday around midnight. You’re blunted, cruising down an inner-city freeway in the backseat of a tricked out Chrysler 300 playing Virtua Racing on a Sega console hooked up to the shotgun headrest video monitor positioned ahead of you. You there? Good. Now you’re at the vantage point Lee Bannon wants you for his latest mixtape Midnight Noir; a surreal-noir soundscape tracking Bannon's alter ego Gnarlon Bando for a single night of seedy misadventure.

On Midnight Noir, Bannon breaks from the J Dilla Donuts template of ADD and quantity–typified on ‘09’s Big Toy Box and ‘11’s BTB 2–to flex concept and cohesion. His segues of cryptic dialogue, tire screeches, redlining engines, and natural sound animate the interiors, roadways, and confrontations inspired by the minimalist titles and production of the 11 tracks spanning Midnight Noir. Bannon’s sleight of hand in shape shifting and half-beat chopping has favored his rolodex thus far, so it’s only natural that stepping out of character as Gnarlon Bando grants him space to parley a dramatic title like “The Chase!” into the satin funk Final Fantasy characters bang to.

Ultimately, Bannon allows the listener to construct the rising and falling action by eliminating dynamic with phantasmagorical synth and sample, and by emphasizing pace with repetitious percussion and bass. Following the opening sequence, “Nighshift Pt. 1,” we know that it’s raining, wherever Gnarlon Bando may be. With the shift into “Pt. 2,” Bannon introduces the listener to the sonic convergence of life, electricity, and infrastructure, encouraging the imagination to construct the setting.

Bannon is deft in continuing his blueprint throughout the mixtape, never confusing the perspective and action of the protagonist with the nature of the scene. Paranoia is suggested in “Arcade Scene.” The preceding tracks’ titles are based around a “Motive” and a suitcase with $50K. Unlike the disco tech scene in Terminator, Bannon distracts us from Sarah Connor’s fear of her killer stalker with the lights, the music, and the dance floor.

During “The Chase!” we are but voyeurs to the weaves and drifts of the cars at play. The confrontation of “The Shoot Out” is palpable, but never gives away to injury, death, or cowardice.

By “The Count Down,” Bannon’s production evolves out of the quasi-ambient into glitch-beat contemporary, harping on the loop “Count on me.” It’s with “The End Credits” that the Gnarlon Bando's Midnight Noir is indeed over, and Bannon is back to being himself, waking from the Rockstar Games veneer and banal moniker to the rising producer with the ability to drunk dial Talib Kweli and DJ Premier.